It probably reached the usual 96 or so degrees F in Tokyo yesterday. On days like these, it's hard to tear yourself away from the air conditioning vent. But at around one o'clock, this was achieved knowing that food adventures were to be experienced.

Upon flipping through Brutus' issue on parks, there was a review of Pepacafe Forest in Kichijoji's Inokashira Park.

Not really knowing anything about the place except that it was surrounded by trees, we stumbled into find it freakin packed - the photo above was snagged off the internet (yesterday, all these seats were bumpin). Anyway, we were seated in the back corner next to the fan (yeay). The cafe overlooked more trees than I had seen combined in the past few weeks, which was very welcoming in my book. By this time, we had figured out that everyone was chowing on Thai food. Perfect - vinegar, spiciness in times of heat is a match made in heaven.

By this time I was kicking myself for not bringing my camera. We ordered cold Tom Yum ramen, fresh spring rolls, and the boiled chicken with rice lunch set. I have to say that the Tom Yum ramen topped the list, although the spring rolls will definitely taunt me in my dreams. The chicken lunch set was also 9 out of 10 enjoyable for it's tenderness and perfectly firm basmati rice. (this is what the chicken lunch set kinda looked like - without the egg).

What's more, is being able to order a cassis oolong (cassis fruit, tea and shochu - it's an alcoholic drink) amongst an impressive list of drinks. By the end of the meal, there was a Phuket beer bottle (empty), a glass of cold ice tea (that came with the lunch set), a cassis oolong and a mojito (er... empty and empty...).

I have never had such an eclectic array of chilled noodles since living in Tokyo. What was so exceptional about this ramen, was it's subtle but not wishy-washy taste. Spice and sour in perfect harmony. The ramen noodles, were also cooked to perfection - very thin yet firm.

After this meal, thinking about dinner was put at bay...

When 8pm arrived, we were due to meet up with three other friends for dinner at Hatagaya station (near Shinjuku). It was decided to hit up a Chinese restaurant that we had been to before where they serve you grub until you holler stop! They bring you whatever the chef is cooking for the night, so everything is in season. Chinese food in Japan, is, I'd like to believe closer to the Chinese eat than Chinese food in the U.S. (although, I must say, there's-nothing-wrong-with, and, I- have-a-thing-for orange chicken...).

I actually ended up not being able to participate in grubbing on two dishes (with full enthusiasm) - sea cucumber and suppon (turtle). Sea cucumber I just can't get over, due to my snail/slug phobia - and did not touch. And suppon - well, I tried it, but it was just not very enjoyable... It was kind of chicken-like at parts and pork-knuckly in other parts.

But, what's great about this place is it's un-greasiness. Dishes with just greens are presented at perfect intervals - cleansing the palate for more curious eats. 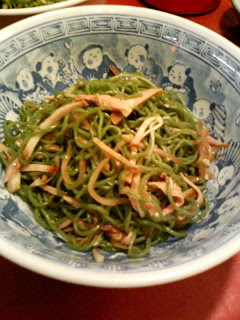 When you do say stop, it is CRUCIAL to understand that the meal reaches its final conclusion with a carbohydrate dish - either fried rice or noodles (the only thing you can choose through out the whole meal).

Round two of cold noodles for the day. I had realized that I should've been taking photos all day with my cell phone. That is where I got this last shot. Green noodles from the gods with little bits of salty yummy pork... mmmm.....

(just a note, the only picture I took was the last one of the noodles)