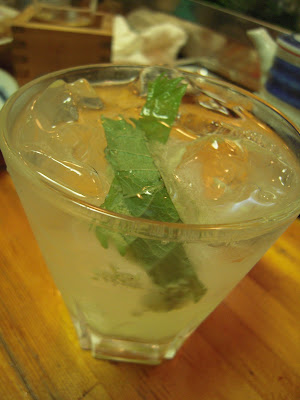 Last night, I was at a local izakaya, Washio, with some friends. My friend Takachiho, fresh off of work, downed two bottles of beer, three sake servings and quickly moved onto his next drink all in the time span of about 80 minutes. "Master, please give me an awamori!" (Master is the word used in Japan to refer to the owner of an izakaya or bar.)

Awamori is a hard liquor native to Okinawa, Japan. It is made from rice and is distilled. It has a distinct grassy, pungent aroma that some folks love and others can't handle (similar to how lamb agrees with some and not others). It's pretty potent, so just one can knock out an untrained awamori drinker.

Okinawa is a tropical region so it is common to drink awamori all-year long. Us Tokyoites in the north tend to drink awamori more frequently in the summer months. The surge in availability of awamori in Tokyo signals the start of fireworks and matsuri.

Anyway, as the master brought out the awamori to Takachiho, it was served in a form that I had never seen. I thought it was a mojito. I asked Takachiho what was in it, and he said, "Shiso and wasabi." As I looked closer, indeed, there were grainy bits of wasabi gracefully trickling down to the bottom of the glass with beautiful cut petals of shiso floating at the top. 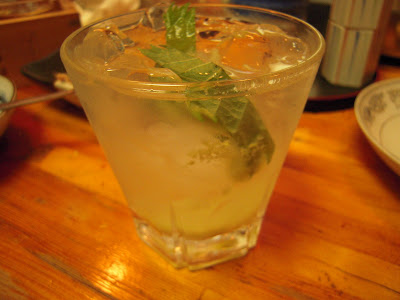 I tried some and it was totally novel and refreshing. Because awamori has a grassy, wild aftertaste, the familiar taste of shiso tamed it down. What was also interesting was that the wasabi tasted sweet when coupled with the awamori. As this was a completely new flavor to my tastebuds, I was at a loss of reference. But if I had to sum it up in a few words I would say: refreshing, wild, energetic and curious. 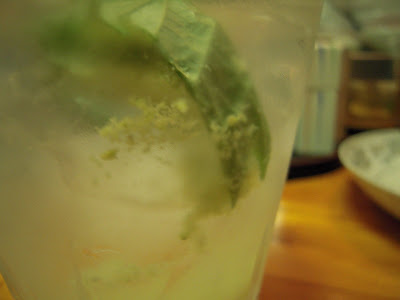