By Yamahomo
Originally posted on March 23, 2009

The day came, and went. The reception was wonderful, the couple looked very cute as you can see, food was good, and I got completely wasted. That's all what counts on the day of the wedding, right? For the guests, sure, but for me, it was a lot more than that. Making the bouquet, dressing the bride into a beautiful kimono, making sure the flow of the evening went without any glitches- I put on my Jennifer Lopez "Wedding Planner" shoes, and made sure everything went smoothly. The only thing that didn't go quite well as I hoped, was the cake...

It started Friday at 10am. Kayoko and Ryo came to help me, and they measured all the dry ingredients, cut all the strawberries, and I started whipping eggs and sugar. Things went pretty smoothly. Though I estimated about 30 minutes per cake, it actually took just about 20 minutes for making a sheet of cake. We were focusing too much on video recording, and don't have many pics of the process. Please check out the debut episode of "Gays of Cakes" sometime soon for detailed steps of wedding cake making. Some of the batches didn't rise the way I wanted, so I ended up making 11 cakes. 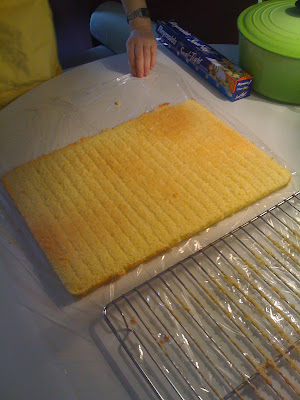 The 6th layer from the bottom didn't rise. I realized I was way over mixing the batter, and made sure the flour was mixed in ever so gently after that. 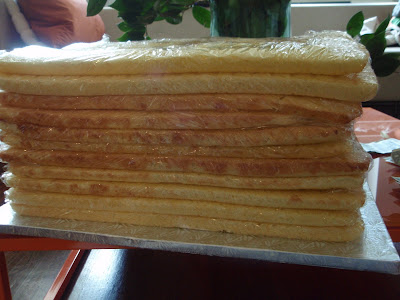 I finished baking all 11 layers at 2:03pm then ran to my hair cut appointment. I got home around 4:45pm, practiced dressing the kimono on Ryo, ate dinner, and started stuffing the cake with whipped cream and strawberries. As you remember, I decided to add gelatin into the cream to stabilize it, so I had to melt the gelatin and wait until it gets to room temperature. A quart of cream yielded about 2 and a half layers. I sandwiched 6 sheets for the bottom layer, cut three of them and made the second layer. By this time, it was about 10:30pm, and we decided to call it a day. I stored everything in the fridge.

Saturday morning, from excitement and worrying too much, I woke up at 6:50am, and made the bouquet. I used cymbidiums, which were a bit tricky. Each blossom doesn't have a long stem, so I had to wire and bunch them together. It took almost an hour to assemble it. At 8am, I called Kayoko, woke her up, and she came over around 8:30 to help/witness/videograph the rest of the process. At this point, I also decided to make the third tier by cutting a sheet of cake into 6 pieces, and sandwiched them with cream and strawberries.

Creaming the surface was easy since everything was to be covered by the basket weave pattern, so I didn't have to worry about smoothing it out perfectly. After creaming, I placed sticks to support the layers, and ever so slowly, I placed the second tier, then top tier. Piping was the biggest pain in the ass. Because the basket weaving tip was thin, and the cream was pretty solid, I had to squeeze VERY hard to pipe. It was a four-hour ordeal to decorate the whole surface.

End product. How BEAUTIFUL it is!!! But every time I moved it, the whole thing jiggled. We were like, "Oh well, the cake is very soft and not covered with fondant, so we just have to deal with it." 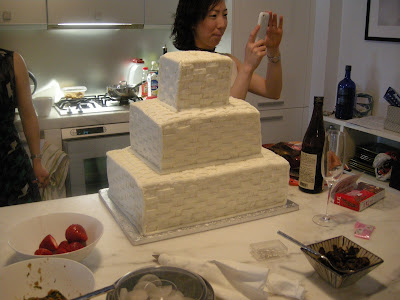 What the fuck was I thinking? I should have realized that the jiggling would cause the complete meltdown later on. But I was too happy with what was in front of me. It was a bit after noon when we all finished the cake. I had enough time to cook lunch for bridal suite, and we were enjoying getting ready. I dressed Aya into one of the most beautiful kimonos I've ever seen, and she looked perfect for the occasion. She was GLOWING! 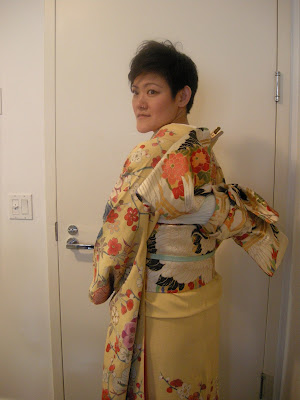 We boxed up the cake, and got into a car. It was a short drive, but New York City roads are not equipped to carry a three-tiered "very light" cake. At every brake, every bump, my heart stopped. But I didn't want to show that to a nervous bride who was sitting next to me, so I played the "I am cool" card during this nerve-racking drive. We finally arrived at the restaurant. Luckily tables were already set up and I carried the cake to the table. I was like "Ok, now I can start drinking since cake is in the house!" Then I opened the box and saw the horror..

This is me crying in front of the cake. From this angle, it looks fine, but... 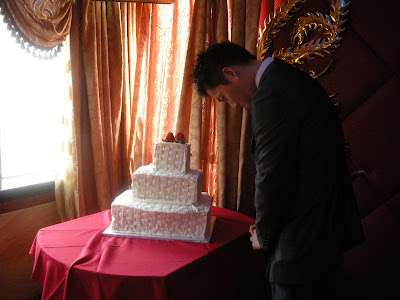 Because of the lightness of the cake, bumpy ride made the bottom layer to crack/collapse, and the second tier totally tilted into the crack, which made the top tier completely stuck to the side of the box. I called out to Kayoko with a horrified face. The conversation from here goes like this.

Me: Kayoko, come over here Right Now!
Ka: (after seeing the scene) Oh My God.
Me: I can't believe this! What should I do? I wanna cry. FUCK FUCK FUCK FUCK FUCK!
Ka: Ok, front side is still unharmed, so let's move the second tier back up on it.

We moved the second tier with our hands. It was still unstable.

Me (yelling out): Ryo, bring bunch of chopsticks!
Me (to bride and groom): Do Not come here. Everything is fine, but you shouldn't see this.
Bride and groom nervously smiled at me and the box, but they went on to do whatever they were doing.

Ryo brings 4 chopsticks with the face that said, "What the fuck are you talking about? I am busy putting table cards and can't you do it yourself?" Then she saw the crime scene and realized the seriousness...

I put bunch of chopsticks in the back of the cake to support the second tier. It looked like a really really bad construction job.

I placed the cake on the table, and at this point, everyone saw what was happening. They didn't want to say anything. They knew better not to come and say "it's ok". I must have looked pretty awful.

As I said, front side was not as damaged as the back, so we made sure no one saw the back side. 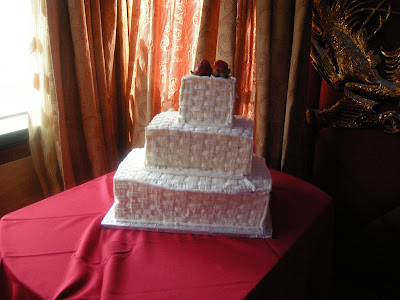 Styrofoam in the back was used to secure the cake in the box so that it doesn't move, and we used it to prevent the bottom tier to collapse even further... This is like Jekyll and Hyde... 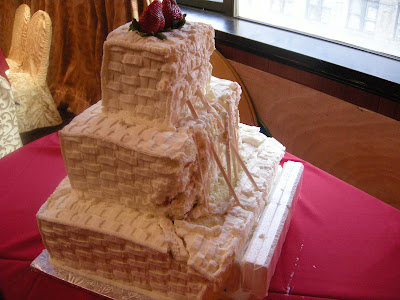 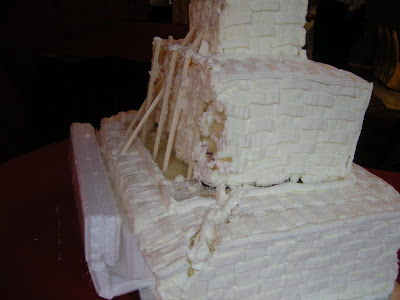 Everyone was supportive of the situation. Despite my emotional distress, the bride and groom didn't seem to care too much, and everyone else was like "you can't see anything wrong on the front side". The emcee of the evening, Drae was like "Broken cake makes a stable marriage"

It was fine at the end. I mean it wasn't fine, from the cake baker's point of view, it was a complete failure. But everyone LOVED the cake. Unlike regular fondant cake, which looks gorgeous but usually doesn't taste good, mine was light genoise with real whipped cream and fresh strawberries. What is not to taste good here?! 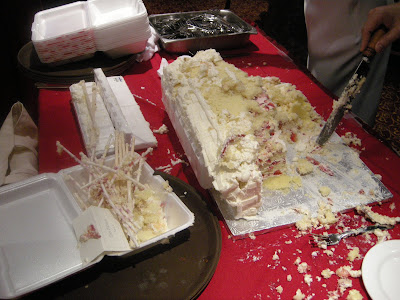 Almost all the cake (this was basically for 150 people, but we had 100 guests) was gone by the end of the evening.

I talked to one of the guests who is a caterer and he praised my effort so much and told me someone he knows asked for strawberry short cake as wedding cake, and the shop told them that they can only make one tier cake because it is too light and fluffy to tier up. Duh.... There were other options I could have done, such as assembling them on site, but I couldn't be bothered and thought it would be too stressful. The restaurant said they won't be ready with prep work until 5:00pm (reception started at 5:30pm), so I didn't think I had enough time to assemble on site.

I learned a lot from this experience:
1. Wedding cake should be made by a professional with professional cake construction knowledge. Thinking you can do it by watching bunch of episodes of Ace of Cakes is a bad idea.
2. Wedding cake shouldn't be a strawberry shortcake. If it's strawberry shortcake, it must be one tier.
3. I can't bake/dress bride/make bouquet. Separation of duties are very important.
4. I overestimated what I can do. Three tiered cake isn't something I can do...
5. Transporting a cake in New York is a bitch.
6. Dealing with disaster with dignity (not me, but Kayoko was) is a virtue.
7. No more wedding cake baking for me.

Again, everyone loved the cake, and no matter how pretty or not pretty it might look, taste counts, and in that regard, I satisfied all the guests bellies with a very tasty cake.

I am happy it's over. I am sad it didn't end with a perfect appearance. I am proud of my trying something very important and special at heart to the bride and groom. 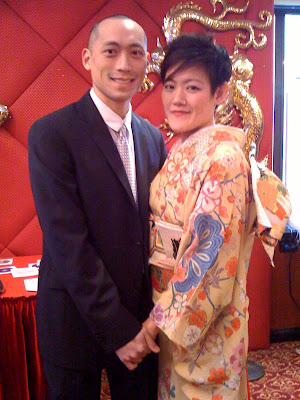 It's over... It's fucking over... Maybe I will leisurely make some macarons this weekend.