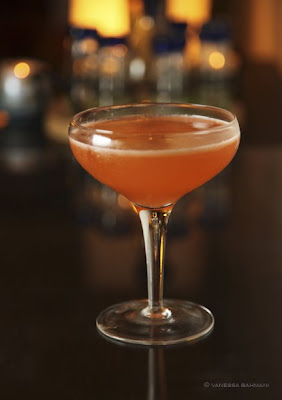 I recently had a conversation with a friend in which said friend mentioned to me that he's not a big fan of "fancy cocktails," but instead preferred the simplicity of two ingredient drinks, with his go-to choice being the grapefruit and vodka tag-team known as the Greyhound. Implicit in his tone was the notion that any drink with more than a couple of ingredients that requires some level of skill by the preparer is too fussy, thus unbecoming for a man to order it.

Now before I delve into the umbrage I took with his statement, allow me to disclaim: I am no hater of simplicity. In fact I am quite a fan of highballs and many other simple two and three ingredient cocktails, with two of my favorites being the Cuba Libre and the Presbyterian.

However where I took issue was the implication (and the underlying fear) that a bit of sophistication could be the slippery slope that would ultimately result in compromised manhood. I thus reminded him that he was allowing his notions of manhood to be boiled down to the simplistic tenets espoused by magazines and television programs like Maxim and The Man Show, respectively, with their overbearingly nostalgic obsession with the college fraternity lifestyle--to the point where something that was once understood as a comedic caricature has now become a veritable standard that many grown men live by. It is as if sometime in college, between sophomore year and graduation, someone presses a pause button on the psyche of the American male, preventing the natural cycle of growth and maturity to run its course.

Perhaps this problem is not completely of our own making--at least when it comes to drinking--as the behavior may at least partly be an adaptation derived out of necessity, as many bartenders (and the bars which employ them) can't make a decent cocktail if it involves ingredients that aren't funneled through a soda gun. Nevertheless, I am here with my finger firmly planted on the play button.

Thus in an effort to introduce some balance and variety to my poor friend's palate (and hopefully by extension to his life), I decided to take the Greyhound he so dearly enjoys and build on it. That is how today's cocktail, the Chinatown Express, came to be. Playing on the name Greyhound, I came up with the name Chinatown Express as an homage to the wonderful bus lines in NYC's Chinatown that shuttle you to various cities along the Eastern Seaboard with such haste that you'd swear Keanu Reeves and Sandra Bullock were on board. Of course I am aware that the original Greyhound drink references the dog breed and not the famed bus line, so this is merely a playful flourish, if you will.

Tools: shaker, strainer
Glass: coupe
Place all ingredients in cocktail shaker with ice and shake vigorously for about 10 seconds. Strain into a chilled coupe glass and enjoy!

This cocktail is best enjoyed with the same haste as it's namesake; remember the first rule in drinking a chilled cocktail such as this: that you ought to drink it while it's still laughing at you.

I have yet to make this drink for my friend, but I have no doubt that he will at least appreciate the point I was trying to make, if not the cocktail itself. The point being, of course, that we are fully ourselves when we are balanced and open to new experiences, be they in the form of food, drink, or even music. Sometimes it is appropriate to wear jeans, and sometimes it is appropriate to wear a tuxedo. Having the wisdom to know the difference is what separates the men from the boys. Cheers!