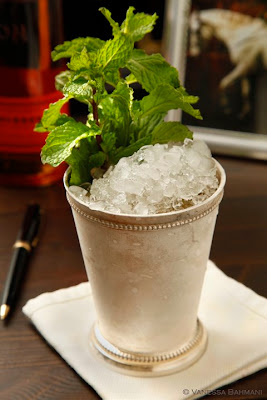 The first Saturday in May is a special time of year for many Americans, especially those south of the Mason-Dixon. The month of May is to fans of horse racing what March is to college hoops fans, because it means it's time for the annual "Run for the Roses," better known as the Kentucky Derby. With this year's race only a few days away, it is only appropriate to dedicate today's Happy Hour to the official drink of the Kentucky Derby, the Mint Julep.

Derived from the Persian word Golab (rosewater), the Julep is as much a symbol of American ingenuity in the art of inebriation as the exalted Sazerac. It also predates the Sazerac by at least half a century. The earliest written mention of the Mint Julep dates to 1803 when John Davis, a British tutor working in the South described the drink as "a dram of spirituous liquor that has mint steeped in it, taken by Virginians of a morning."

As is expected, a drink of such vintage has been a source of vigorous debate regarding the finer points of its recipe and origin. To be sure, there is no one "original" Mint Julep recipe--more accurately stated, there is no way of knowing who's recipe is the original. For example, Ted Saucier's 1951 classic cocktail guide Bottoms Up features fifteen different Julep recipes, all from various noted Southern barmen. There's even a debate over whether the mint should be crushed or not, with some contending that muddling the mint makes it a Mint Smash, not a Mint Julep. We shall leave that debate alone.

Modern Mint Julep recipes almost exclusively call for bourbon (the distinctive brand of American whiskey produced in Bourbon County, Kentucky), but this was not always the case. Early nineteenth century Mint Julep recipes called for either brandy, European or Canadian whiskey, and possibly even rum, as some historical evidence suggests the Julep entered the states in the late 18th century via New Orleans by way of the Caribbean, which of course is the dominion of rum.

Perhaps only after the production of American bourbon was refined did it begin to replace other spirits in Mint Julep recipes. But regardless of one's "spiritual" position in this debate, few things are certain: bourbon was the spirit of choice in the Mint Juleps served in the inaugural run of the Kentucky Derby in 1875, so by the time the Mint Julep became the official drink of the Derby in 1938, bourbon had long made its mark (pun intended) as the go-to spirit in the recipe.

Wet the outside of the julep cup with water and place it in the freezer. Once well chilled, carefully remove the cup from the freezer with a towel so as not to destroy any of the frost. Place the mint and simple syrup in the cup and using the muddler, gently crush the mint leaves. Fill the cup with crushed ice, add the bourbon, and give a gentle stir to distribute the mint. Pack with more crushed ice to the top, and garnish with the reserved mint sprigs.

The silver julep cup is the traditional way to serve and enjoy a Mint Julep. The hot and humid climate of the South made this metal vessel the perfect choice for extending the coldness of the drink as long as possible, especially since the drink was invented before there were any refrigerators. But julep cups are quite difficult to track down (not to mention expensive), so feel free to use a collins or highball glass (chilled the same way) instead, which have become the modern day substitutes.

While the Mint Julep is a fairly simple and easy drink to prepare, I caution against taking too casual an approach. While it's tempting to cut a few corners, it is also the easiest way to make a mediocre and underwhelming Mint Julep. Trust me when I say that the extra care taken in assembling a good Mint Julep will reap rewards that far outweigh the value of the time and money expended in the venture. Now that's a horse worth betting on. Cheers!