On the way home just now I spied a kidnapper van boasting that it contained "JOSE'S BAGELS." It struck me as odd that a commercial bagelsman--in New York of all places--would stick with his given name of "Jose." Absolute Bagels, for example, does not advertise itself as "SOME THAI PEOPLES' BAGELS." (note that the worst thing that can be said about AB (according to yelp) is that it has a drab exterior.)

Upon reaching my apartment just now, I emptied my pockets and discovered an assortment of items--remnants of a weekend spent trailing out-of-town friends-since-the-third-grade. It was like Memento, only with a completely staged photograph: 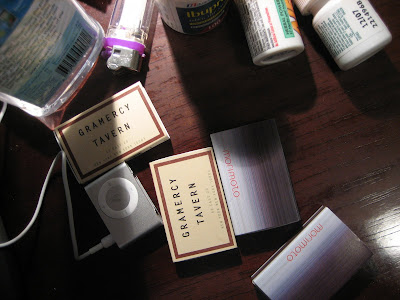 "If memory serves me correctly," Saturday night was dinner at Morimoto. Despite the fact that his website compels you to listen to mediocre music, I have a great admiration for Morimoto; if it is possible to un-ironically state that you have a favorite Iron Chef, then Morimoto is by far my favorite Iron Chef. His restaurant, a hair north of the Metapacking District, is a monstrosity of concrete, glass and heavy chairs that seems airlifted right out of Las Vegas. Every diner's dress seemed to signify some kind of readymate identity ("banker," "normal everyday striver," "prostitute," etc.). Our four split three appetizers: a "Morimoto sashimi" plate, a selection of sashimi slabbed atop chunks of Buffalo mozzarella and Rock shrimp tempura dredged in wasabi aioli and a spicier but not all that spicy Buffalo hotwing sauce. All three were okay but lacking in subtlety. The stylish Morimoto sashimi plate featured miniature tiers of fish, but the top layer of smoked salmon crowded out all the other flavors. The sashimi with mozzarella was much better than it sounds, yet the union of two seemingly disparate textures/tastes didn't yield any facemelting epiphanies--it tasted like sashimi and mozzarella should taste, Hegelian it was not. The tempura was warmly received, yet my friend's zealous endorsement that it was "like popcorn shrimp" reminded me that it was supposed to be delicate, flaky and tempura-like, rather than "popcorn shrimp"-like.

For my main I had a dish called "Duck, Duck, Duck," which featured a duck egg, a duck leg done up Peking style and a roast-duck sandwich. "Dude, wouldn't it have been cool if there was a goose component, so it would be like 'Duck, Duck, Goose?'" That would be sweet. And you know what? Morimoto is like three steps ahead of all of us. The sandwich featured cuts of roast duck nestled within a foie gras-infused croissant. "W h o a ... so there is goose in there somewhere!" Yes, one could get lost in the language of "Duck, Duck, Duck," just as one could spend eons speculating about what it means for a bagel (made by Asians, no less) to be absolute.

"Duck, Duck, Duck" was incredibly rich, yet I didn't leave the restaurant uncomfortably full. Nor did I think of it as decadent, until the next day, when three people observed that "Duck, Duck, Duck" sounded "decadent." I do not remember what I had for dessert.

Let this be a lesson for Jose's Bagels: Morimoto is not called some Chinese name or some Italian name. Because if someone else tried to pull off "raw fish with cheese" or "Peking duck menarge (sic)," it probably wouldn't have worked. Sometime it's all in the name.

Gramercy Tavern made up for its somewhat drab, two-strikes name by supplying me with a very fine, eminently recommendable smoked trout and then the nicest rack of veal I have ever had. Even twenty minutes into the rack the veal had maintained the buttery, meltysoft texture it had when it arrived. The veal was flanked by morels, peas and Swiss chard--a flawless combination. I had a tiny cube of someone else's lamb, which was delicious as well.

An unexpected highlight of Gramercy Tavern was its dessert. I had the apricot tart, which was lovely, and a cup each of the Ethiopian and Costa Rican coffees. The Ethiopian was unfathomably good, with hints of cinnamon, cardamom and orange. It would go well with this: 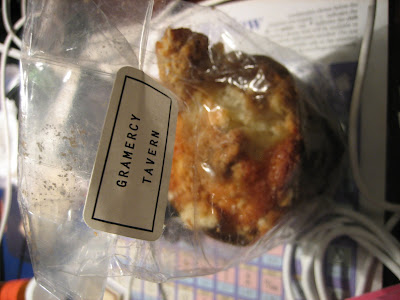 An admission that even an excellent meal can't possibly be worth the cost of multiple rare Jeru singles, GT provides diners (sometimes? always?) with the next morning's breakfast. In this case: brown sugar coffee cake. I'm not sure that it will be worthy of the Autobot-like protection I have offered it over the past few hours. I tasted a bit of its crown, and the novelty of brown vs. non-brown sugar was not enough for me to think, "Wow this is like the 'Duck, Duck, Duck' of breakfast foods!" This was confirmed when I explored another pocket. Out dropped the following: 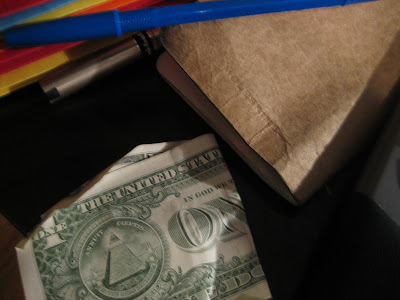 A dollar--of the many withdrawn, the only one to make it home safely.

And a pad of paper. The most recent page:

"CHARRED CHAR WITH SIDE OF CHARD?"