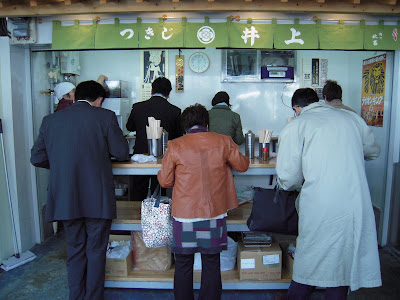 Eating while walking, talking, driving, computing and making love. Most Americans have done many or all of these things. Hopefully not simultaneously. Eating while standing in one place, however, is something that Americans don’t do on a regular basis… yet.

Enter Tokyo, and the prevalence of stand-up dining, or tachigui. Step off most any train in the city and you are likely greeted with tachigui ramen and soba shops filled with salarymen scarfing down noodles in four minutes. Exit the subway station and choose from a stand-up drinking, sushi or yakitori bar. All of this led me to the following question: Why do Tokyoites embrace eating erectly so enthusiastically?

Population density. There’s simply no space.
With a population density almost one and a half times that of New York City, Tokyo is one big swarm of black hair. In fact, if you shot aerial video footage during the morning rush, I am sure many parts of the city would look like black carpet while you were dropping acid. Given the lack of space, a large percentage of Tokyoites must do a lot of things standing, including commuting, napping and eating. 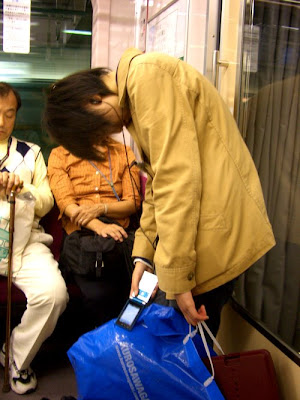 The sushi bar is to Tokyo as McDonald’s is to San Bernadino. During the Edo (former name of Tokyo) period, what we now dub as “sushi” was born out of the needs of urbanites. Prior to the nigiri form of sushi that we see most often today, sushi was commonly known to take the form of Osaka-based oshi-zushi (sushi pressed in a wooden box). The nigiri form still utilized the vinegared rice, which helps rice last longer and brings out the umami of raw fish. But contrary to oshi-zushi, nigiri was fast to prepare and customers could eat it with their hands while standing up, resulting in an incredibly fast turnover rate.* Cha-ching! 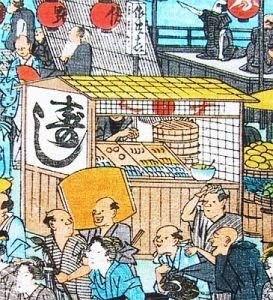 Don’t eat while walking for you will spill.

It might just be my fault as Yoko, but if I could, I’d like to blame part of my slob-factor on my American upbringing. Observing my Japanese counterparts, I realized I drop way too much food. On more than one occasion, I have felt the need to defend myself with You never saw that fall out of my grubby hands and leave a trail as if I were Gretel or that No, I didn’t just eat 7 rice crackers and spill crumbs all over your tatami mat. I have consulted a few of my friends to ask them what the real beef was with Japanese people and walking while eating. Most have expressed simply that it’s rude to spill: on the ground, on yourself, and of course on others. And that’s when I finally understood their apprehension with eating and bipedal locomotion. Surely if you were walking around while eating, you would most likely spill onto one or all of those things. So if eating while walking is a no-no, eating while standing starts making a lot of sense.

Standing while eating in Tokyo has deep roots. Population, historical rhetoric and principles of etiquette are all embodied in this simple act. Who knows, what with America enjoying Segways and stand-up roller coasters, a tachigui trend may be right around the corner. 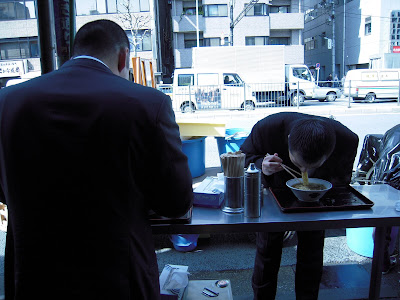 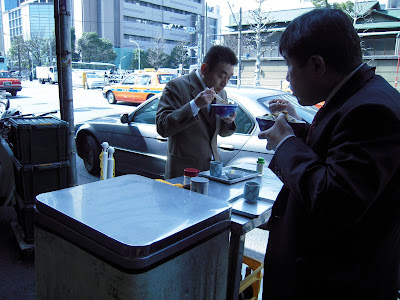 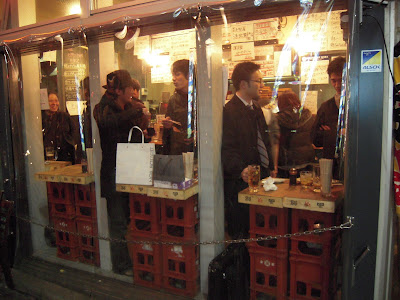