Temaki (hand-rolled sushi) is an easy way to entertain a crowd. There aren't much prep work involved, but the spread is quite luxurious looking and it's surely a crowd pleaser.

You just make whatever you like to be inside, spread it nicely and voila, party starts. 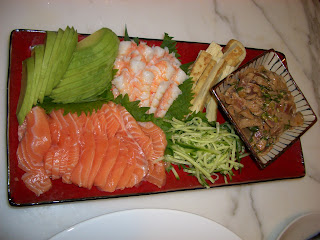 Instead of going to Japanese grocery store, and buy overpriced sashimi quality fish (which is a total bullshit, you can buy the same quality fish a LOT cheaper at a good fish mongers), I just went to Lobster House in Chelsea Market. Their salmon is always fresh, and I learned from an avid fish eater that you should semi-freeze salmon before you eat it, and that will kill all the bacteria. So I froze it for about an hour, and it's easier to cut, and all the bad guys are dead, easy process.

Despite last week's trauma on the mandoline, I grated cucumbers on it. Although my heart was pumping a bit, remembering the horrific incident, I made sure to use the guard. Guard is great, but you can only grate half of the vegetables. Still, it's better to be guarded than losing a part of your finger right?

Aside from obvious ones you can see (salmon, shrimp, avocado), I made seared tuna belly marinated in ponzu sauce. It was only $9.99 at the market, so I bought it. I know their fish is fresh enough, but thought it wasn't fresh enough to just cut it up, so I seared for like a minute on each side, then sliced them up, and put it in ponzu sauce. Citrus in ponzu will cook the meat so there shouldn't be any worry.

Shrimp is also another easy one. I cleaned it, stuck it on a skewer (to keep it from curling up), boil for a couple of minutes, and fillet it in half (inside out, so that it looks like shrimp on sushi).

I am not so much into fishy fish (hikari mono, or shiny kinds), and I don't like fish eggs (yes I am very picky and cheap at sushi place since I don't like ikura, uni, and other all kinds of expensive stuff). But I love tamago. I have a tamago-yaki pan, so I mixed eggs, sugar, salt, soy sauce, and dashi, made tamago-yaki and cut them up. Yum! 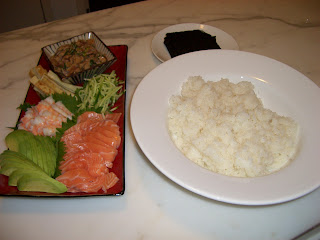 Sushi and sake should always be accompanied. Sake really clears pallet from fish. This time, instead of buying a big bottle, I bought three small bottles and had a little sake tasting. I like Kurosawa, which is clear, refreshing, and cheap. I was very disappointed at Tukasabotan, which was almost tasteless. Something notable in sake world recently is that many brewers have started to make bubbly sake. Before I tried it, I was a bit skeptical about it, but it is good. If you don't like sweet stuff, you wouldn't like it, though. I bought Harushika Tokimeki. It's sad how overpriced sakes are in this country. It is 493 yen in Japan for the half bottle, becomes $13.99 at booze shop in New York, and $45 at Megu. At Megu, they put freshly grated wasabi into this stuff, and actually taste nice. Anyhow, sake and sushi, very healthy and tasty dinner we had. 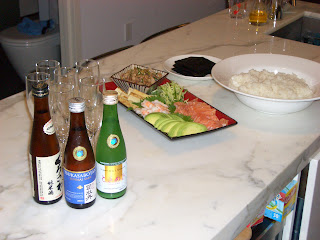