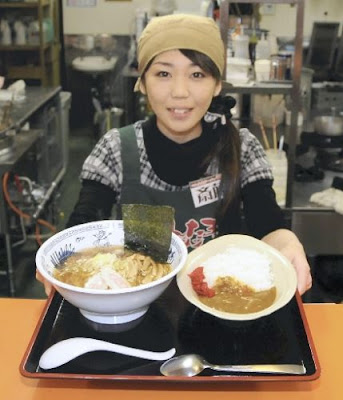 The global economic crisis has brought on haken-giri, an onslaught of job cuts for haken workers in Japanese companies. Haken workers are part-timers and day-laborers who work on a contractual basis, rather than as an salaried employee. This means that a huge percentage of the young Japanese workforce who used to commute to Tokyo for work are finding themselves flat out of a job and wandering hungry in Tokyo's surrounding suburbs where they live.

One such suburban city in Tochigi prefecture became a recent focal point of the news media due to a restaurant that offered 100 yen (approximately $1) Haken Ramen and Haken Curry. The restaurant, Shogun Noodle, is located in Nikko City located 100 miles north of Tokyo.

According to the article that Yomiuri Shimbun published on March 1, the idea was conceived by one of the restaurant's staff members who proposed the idea to the manager after taking notice of customers' haken woes.

Because selling meals at 100 yen would eventually drive the restaurant into the red, they had initially sought to run the campaign during the month of February only. However, with press coverage up the wazoo, they have decided to extend the offer through the month of March.
There is one catch: they cap the offer at 50 servings each for ramen and curry per day.

Considering the catch, the line for this joint might stretch longer than the one at the unemployment office.