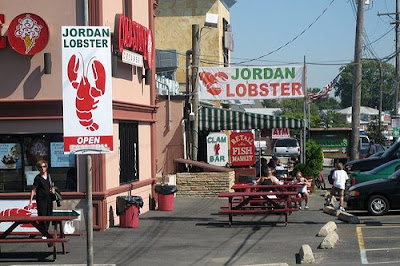 Last week's Umamiventure was to Jordan's Lobster Dock, in Sheepshead Bay, Brooklyn. My friend Christine had told me about Jordan's on Long Island, and after some vigorous online research, I found that the original Jordan's had been in Sheepshead Bay since 1938.

What's fascinating is the lobster rolls are a very regionally specific creation. As Yoko had commented, she had never had one growing up in California, and neither had I. It's very much a New England thing, supposedly started in Maine. (Read Paystyle's Maine Lobster Fest report here).

I had frantically scheduled this trip because I had always thought that lobster season was over after summer, but Paystyle corrected me in that it actually goes on year round. Here's some info on that front. But in any case, we trekked out on the Q train, walked 30 minutes in the blazing sun until we reached Jordan's. Here is what everyone thought (pics by myself and Jones).

ON THE LOBSTER ROLL 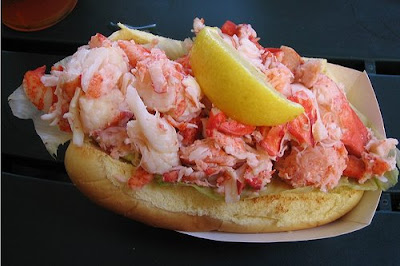 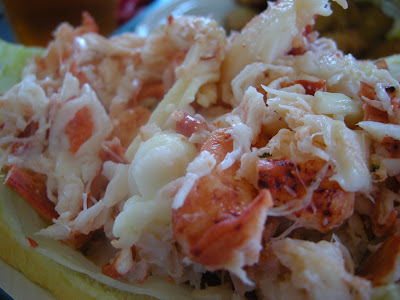 Hamamama: The menu says it's a ¼ lb of lobster meat which looked generous and was plenty for me. I was glad to see that it wasn't drenched in mayo (I'm not a big fan of mayo) instead they give you a packet of mayo on the side that you could squeeze on top of your heap of lobster…yuk, don't like that style either. So I was enjoying it at first, but then halfway through it got a bit bland. I didn't dislike it and feel kind of guilty saying that since who can resist fresh lobster meat, but maybe it did need a bit of mayo or spices mixed in?

Tyson: The lobster roll was amply portioned, and the meat was nicely cooked (sweet and moist, not tough or rubbery), but lacked any seasoning whatsoever. To make matters worse, there were no condiments on the roll, nothing: just a grilled, eggy hot dog bun, a piece of lettuce, and a large pile of picked lobster meat.

I added a bit of their watery cocktail sauce, which improved it a bit, I like crustaceans with more seasoning (Cajun crawfish, Cantonese or Sichuan-style crab, even fried softshells), especially for $17 (I know, it's about indulgence, treating yourself, etc., but still—an amazing whole snapper at Sripraphai is that price, and can feed a party of five).

Amy Ann: I'm not the biggest fan, but I'm not really that sold on lobster. It was very sweet meat, and fresh, but not that flavorful.

Matt: The lobster roll was unadorned, to the point that we missed some flavoring or mayo or whatever. I expected some great homemade tartar sauce or cocktail sauce instead of the Kraft products. The lobster was amazingly fresh, no fishy taste.

Christy: I was expecting my lobster roll to be more of a "lobster salad" with mayo, celery, etc., so I found this one a little bland. But I certainly can't complain about the huge portion of lobster…I couldn't even eat it all.

Paystyle: Lobster roll was good, though it was a little DIY. Normally they come with either butter or mayo premixed. Decent portion of meat, though I've had some with a little more. Difficult spot to get to, but given the decent prices I'd go back if I have a jones for a roll.

Michelle: I wasn't as crazy about the lobster roll though the amount and quality of the lobster meat was quite impressive.

ON THE OYSTERS & STEAMERS 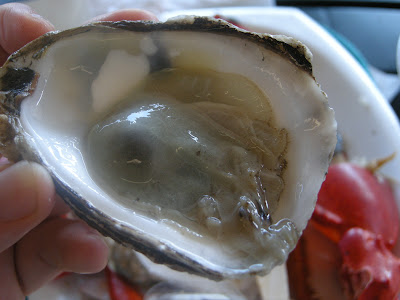 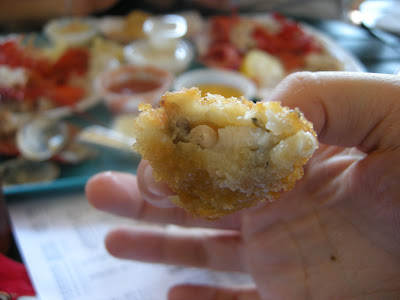 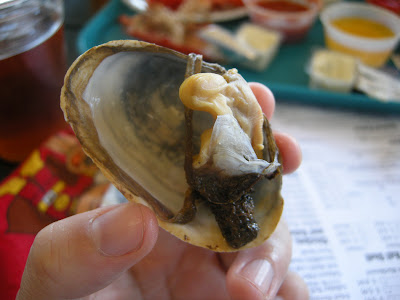 Hamamama: I thought the fried oysters that some others got were amazing- fresh and perfectly cooked. I split raw oysters with a few people, which truly was a great way to end the meal. If I trekked back, I would definitely go with the oysters.

Michelle: All I can say is, the oysters at Jordan's were completely awesome and amazing! The fresh ones were good, but especially the fried ones were the best I've ever had. I would definitely make the trip again for those.

Amy Ann: The oysters were the best. The fried oysters were so juicy and delicious, and full of flavor, that we had to get the raw ones. Usually, fried ones are either fried too hard or too soft, but these were just right. And not fishy at all, even though we ate them on a Sunday. Good fish at Jordan's. I really wish they'd been cheaper, because I could have eaten oysters all damn day. No horseradish though. It's true--Jordan's doesn't know their condiments.

Aliza: YAY STEAMERS!! These thrilled me, along with the fried oysters.

Tyson: Good steamers and juicy, crisp fried oysters. The oysters on the half-shell were good, if somewhat small, even for Atlantic specimens.

Amy Ann : The steamers- that was fun! I'd never had them before. You rip off the siphon, swish them in broth, then dip 'em in butter and eat. Fun and delicious! I love food that's also an activity. Really, though, it was all about the oysters. Fie fie delish.

Kayoko: The oysters, both fried and raw, were OFF THE HOOK. It's hard to find a good fried oyster- I'm loathed to admit this but the Grand Central Oyster Bay (my #1 restaurant in NYC) can't even get it right. But at Jordan's the breading and the freshness of the oysters were perfect, plus they weren't overfried. All important.

Fuminatto: The fried oysters were very good. Everytime I took the first bite, the juice inside spurted out and made a mess.

ON THE WHOLE LOBSTER 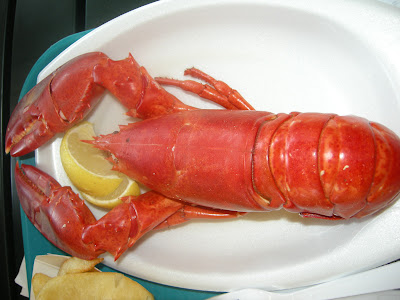 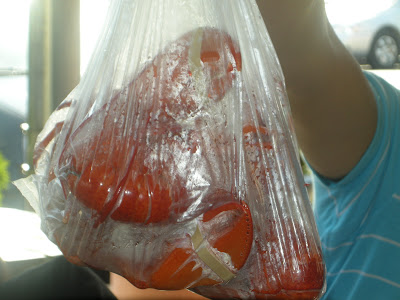 Kayoko: I got a pound of lobster for $19- the meat was juicy and fresh. Totally delicious. Picking it apart is so much fun! The part when you get to the tail, is of course, the best part. Yamahomo printed out a coupon for 3 lobsters for $30 to take home from the fish market (also an awesome part of Jordan's). What a deal!

Fuminatto: I think the lobster roll is a better deal than getting a steamed lobster. Good for lazy people like me. Do not need to dissect the lobster. Not sure about the bun. Will bring ponzu next time.

Paystyle: I printed a coupon so I got a two lobster dinner for $30. Not bad at all. Wonderful choice. 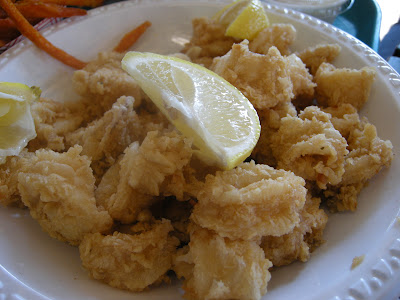 Amy Ann: The calamari was tender but kind of forgettable. No legs either, which makes me suspect it's frozen. 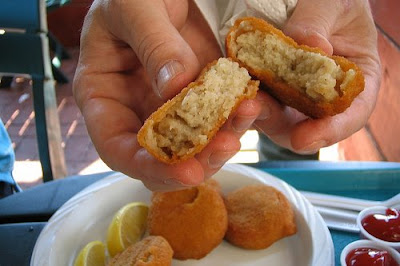 Matt: I'd say I liked the quality of the fish. My fish cakes could have been greasy but were light and tasty. 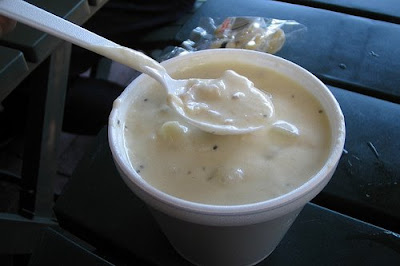 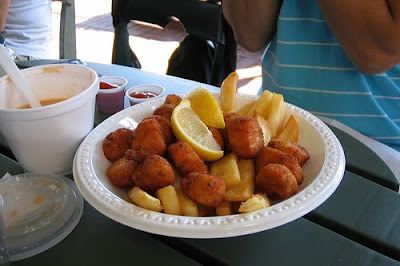 Christy: My New England-style clam chowder was great- the clam to potato ratio was to my liking. I tried one of Yamahomo's fried scallops and decided that they would have been better NOT fried. 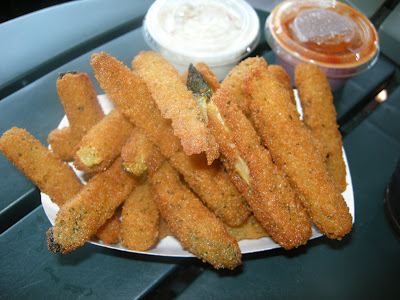 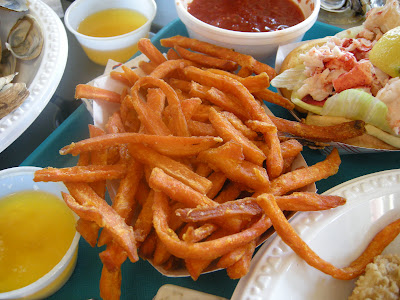 ON THE TREK, THE RESTAURANT & THE EXPERIENCE 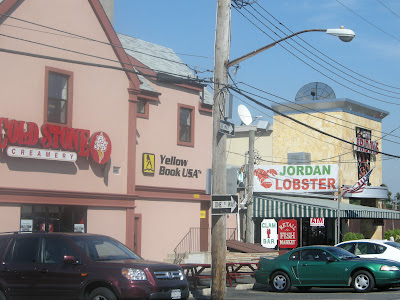 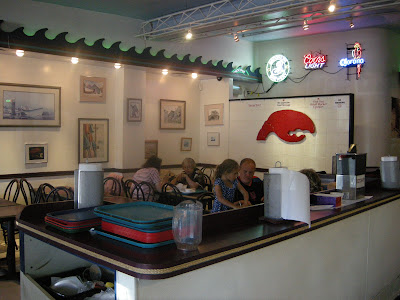 Hamamama: The Q train alone was an experience for me- I had never been that far out of Manhattan via subway in my 10 years of living in NYC. Our original plan was to take the bus to Jordan's once we got to Sheepshead Bay- Yamahomo and I were going to take the car service waiting outside the subway station. Why didn't we do it?? Instead, we all walked about 20 miles (ok, maybe 2?) to get to Jordan's… at least we burned a few extra calories and worked up an appetite. The location of Jordan's is hilarious- it's this dive of a seafood shack squished between a Coldstone Creamery and a TGI Fridays! WTF?

Tyson: The ambiance of the place was hilarious and a little sad—Jordan's is at the end of an inexplicably long and empty road leading towards the dock/harbor area, sandwiched between a TGI Friday's and a Cold Stone Creamery. Such is late capitalism.

Chirsty: All in all, very glad I made the trek, but merely satisfied with the actual food. 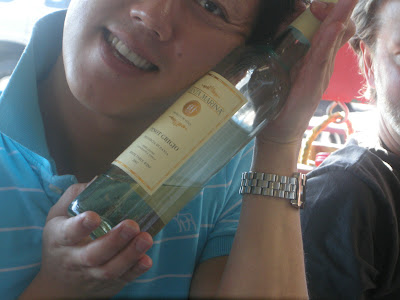 PPS: Check out the photo album below for more pics. Stay tuned for the report on our second Sheepshead Bay stop, Randazzo's. And read up on all past Umamiventures here.