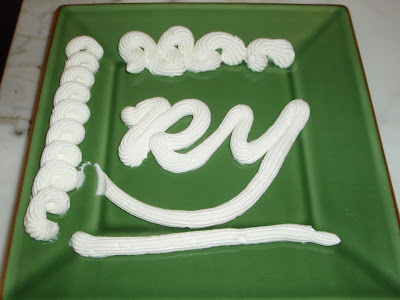 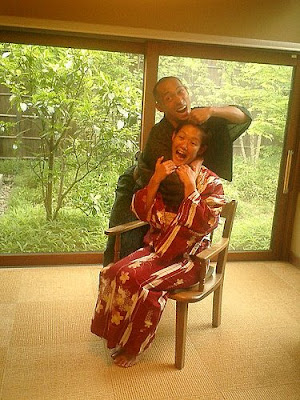 After the initial trial, I learned a lot from all the comments (big thanks to Chef the City!) and decided to try different options. Instead of trying everything, I focused primarily on icing this weekend. As you saw from the last post, the cake didn't rise well, so I made one following the recipe precisely.

It's the same ingredients, but I made sure eggs were room temperature. Mix eggs and sugar, and using hand mixer, whip it until thick under hot water bath. When mixture becomes about 100 degrees, take it off the water bath and keep whipping until very thick. 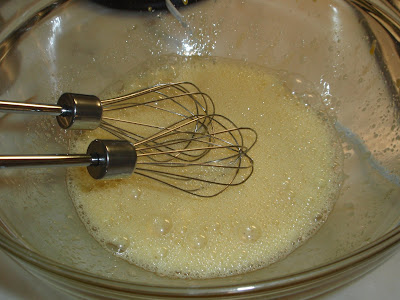 It is pretty amazing how thick it gets after whipping for like 10 minutes. 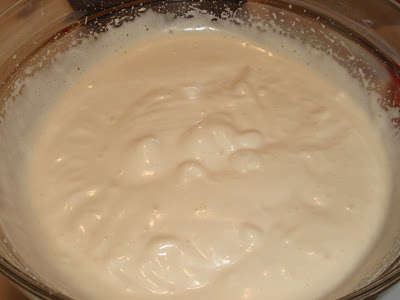 I figured out why the last cake didn't rise. The recipe said that the batter you scrape off from the sides are stickier than the batter in the middle, (I think this means heavier, less air in the batter) and putting them on the middle will prevent the cake from rising. Instead, you should pour the batter directly onto the sides of the pan. Man, baking is very a deep science. 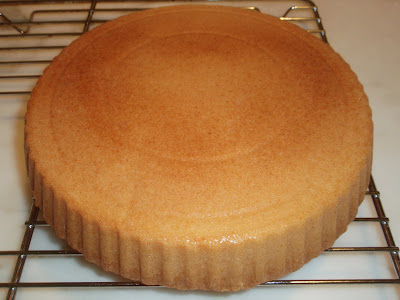 But sure enough, it rose to perfection. 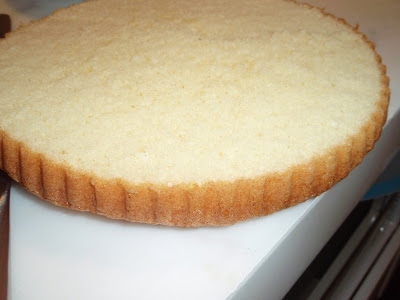 And very spongy. Since this cake uses a bit of butter, it's kind of dry, and I think I need to come up with a good syrup recipe and brush them to make it more moist. Next item to master. butter cream recipe that I found on some site, and I basically halved the recipe since this is just a trial, plus used 2/3 of the butter it called for since I didn't want the icing to be too butter heavy.

Mix egg whites and sugar in a metal bowl, and put it on hot water bath. Stir frequently until the mixture reaches 140. Then using stand mixer, whip it for like 10 minutes until it's thick and cooled. Add a small amount of butter and keep mixing until it's smooth.

It looked ok, but it does hold better. But I just don't like the taste of butter cream. Butter and heavy cream are basically the same thing (you keep mixing heavy cream, and you have butter), but something was different. I don't know what, but it tasted fake. I didn't use any fake ingredients, but it was not the strawberry short cake the Bride wishes for! For any other occasion, I would say, "Suck it up!", but this is after all the biggest day for her, so I MUST perfect "JAPANESE"-style stawberry short cake. My determination is as strong as "Death do us part," DAMN IT! 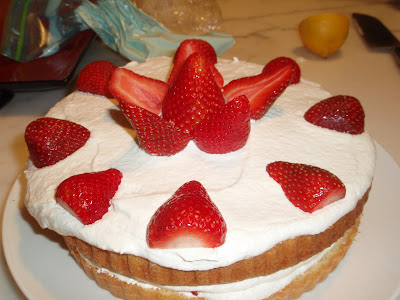 I had a small gathering Saturday night, and I served the cake for dessert. The guests loved it, but I wasn't satisfied. 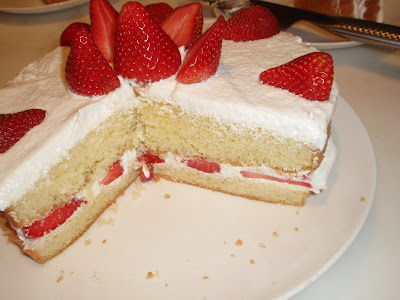 So Sunday, I tried to make stabilized whipped cream, using a recipe from Kraft site, which calls for:

Dissolve gelatin in cold water, and in low heat melt the gelatin completely, set aside until it cools down to room temp. Meanwhile, freeze bowl and whipper for 10 minutes, then pour cream in bowl and whip it in medium speed. Add gelatin slowly, and whip it in high speed until stiff, adding sugar at times.

This one was very promising. I ran out of eggs, so I didn't bother to make the cake, instead, I bought a pound cake, and decorated it using the cream. I think the starch from powdered sugar and gelatin make the cream pretty stable. It doesn't run, it keeps the shape for a long time, and it tasted GOOD! 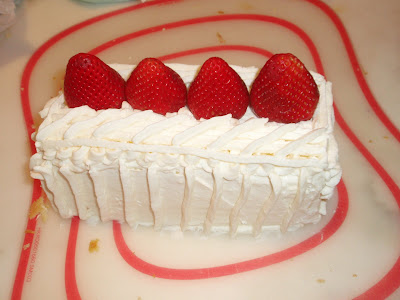 Now it's time to start practicing piping. I piped a bit to see how long it holds shape. It was totally fine in room temp after 3 hours. I have confidence in this cream now. Now I need to go to te baking store and buy a bunch of tips to see what I can do. 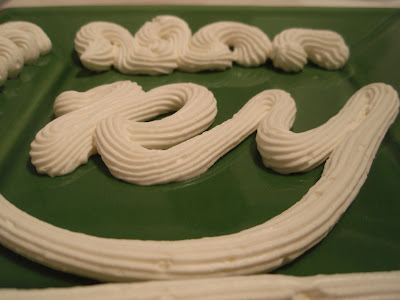 Unlike typical American wedding cakes which use fondant to cover the surface, this cake will be a lot more country. No matter how hard you try, there's no way you can make completely smooth surface with these cream. But it tastes a LOT better than fondant, that's for sure. Plus my love (and tears, sweat, swearing, bitching, potentially some blooding too) for the new couple is in every bite of it.