Recently, I got into a discussion about all the restaurants that have been popping up in the Bay Area. The constant stream of new, hip restaurants is never ending in the East Bay and San Francisco, and it's hard to keep up. Of all of those restaurants that have opened in the last year, Hina Yakitori in Oakland is the one that I keep going back to, and always recommend to others.

Specializing in yakitori (grilled chicken parts), Hina occupies a space on Telegraph Avenue in the Temescal neighborhood of Oakland. Opened by Chef Thomas Cleary, aka Tommy, Hina has a dark, moody interior, where the grilling station is the main stage, with billowing smoke rising into the hood. This is where you will find Tommy, always. I first met Tommy when he worked at B-Dama in the original Piedmont Avenue location in Oakland. I was a B-Dama devotee and one day, out of the blue, they had a separate yakitori menu. There was a limited number of skewers of each chicken part and most were usually sold out by the time I sat down to eat.

The yakitori was memorable and Chikara-san, owner of B-Dama, introduced me to Tommy as the "yakitori guy."

And then, all of the sudden, as quickly as the yakitori menu appeared, it was gone. Where did it go? Turned out that Tommy hightailed it outta Oakland to go learn the art of yakitori in Tokyo. Hrmph!

And here we are, in 2016, where Tommy has returned back to us in the Bay Area to open his own yakitori restaurant. We won. Before we get to the bad-ass food, I want to delve in a little about Tommy's journey to yakitori. He has an inspiring story so I will share it with you here. Enjoy!

I hear you were a professional DJ before your life as a cook. What inspired you to go into the path of cooking?

SO, I was a professional DJ/Producer/manager/collaborator [as ToMc3] for a sort of well-known hip hop artist named Kool Keith. During college I worked at a small Japanese restaurant for six years, so I had some food background. So, as the income from the music thing was dwindling – as it was dwindling widespread throughout the industry for everyone – I needed to decide what I was gonna do for the rest of my life. Struggle and maybe eke out a very miser-like lifestyle as an artist, or go for something else.

The only other thing I knew up to that point was food. So I thought I could maybe work in the back of the kitchen at the newly opened B-Dama and do prep and figure things out. Chikara gave me these cooking books that featured the top 10 yakitori restaurants in Japan. He wanted me to get ideas out of them. I thought yakitori was simple meat on a stick. When I opened the book, I had no idea that it could be so creative, fancy, and beautiful. It became my new obsession. It was like art to me. It was a new and intriguing creative outlet. And I wanted to be the best at this new thing. So I sold my $12K+ record collection, studio equipment, etc. and decided to go all out and head to Tokyo.

You have worked in the food industry in both the Bay Area and in Tokyo. What have been the biggest influencers in either or both cities?

My biggest influencers would have to be the creativity and competitive nature of Tokyo. In particular, my master, Kazuo Nakayama. I was lucky in that he wasn't just a yakitori chef. He was a traditional Japanese kappou chef for 18 years prior to doing yakitori. He was one of the first in Japan to push yakitori to the next level. Places in Japan are so advanced in what they are doing with chicken. America is still basic in its yakitori concepts. Tokyo, in particular, is pushing the boundaries of such a basic idea into something incredible. They have yakitori spots that have Michelin stars and have gone above just meat on a stick. I feel lucky to have learned all the shops secrets and techniques.

Where did you work in Tokyo? What was the name of the yakitori-ya?

I worked in Nishi Azabu district of Tokyo. The place was called Tori + Salon. I worked 15 hour days, 6 days a week with no pay. I'm very proud of the fact that I actually did the dirty work instead of just visiting and tasting and trying to emulate.

Can you say a few words about the mural on the wall, and the artist?

The art is done by my brother Tim Diet. It's inspired by old skateboard deck graphics. He painted it by hand with brush. We grew up skating and doing graffiti, so it's kind of a nod to that era. Ok, now let's get to eating! What I love about Hina is the casual, izakaya vibe. They have an excellent sake, shochu, and beer menu, which is the perfect accompaniment to all the delicious appetizers that Tommy and his staff make in-house. Get 'em all! We did. 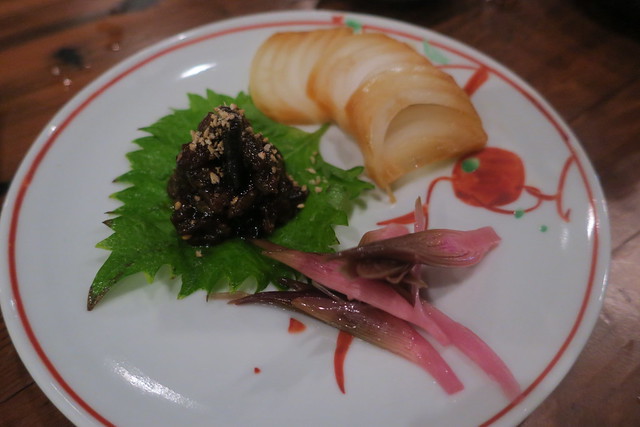 And now, for the shime (ending) to the meal... drumroll please... Hina's tori soboro donburi (ground chicken on rice) is hard to beat. It comes with a poached egg and a cup of chicken broth. Save room for this.

Tommy's right-hand man, Steven is another reason we come here. Steven is rad and also very talented on the grill. Hey Bay Area, don't sleep on Hina! It's one of the best izakayas around. It's a little easy to miss amongst the hustle and bustle of Telegraph, but just look for the Hitachino neon sign. Tommy is creating art with chicken and we are happy to taste it all as he experiments along the way.