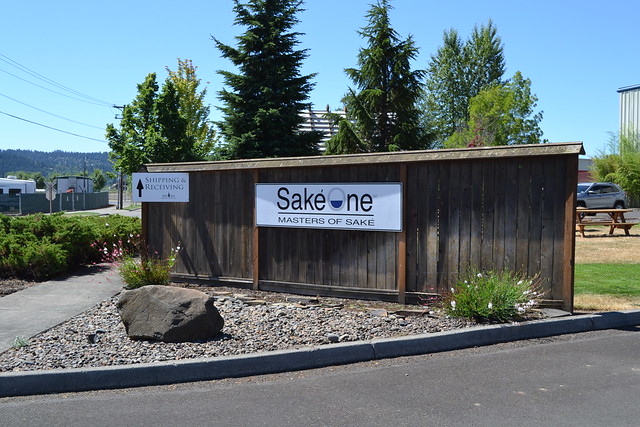 Last month, Kayoko and I visited Portland for the 5th annual SakeFest PDX. It's always a pleasure to hang out in Portland, and this time, we even took a side trip to the Sake One brewery in the Willamette Valley's Forest Grove. 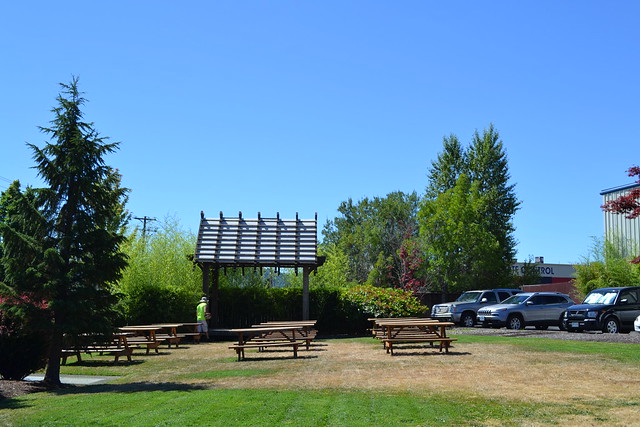 Nestled between wineries and berry growers is Oregon's own sake brewery. Operating since 1998, Sake One produces all Momokawa sakes here in this hangar: 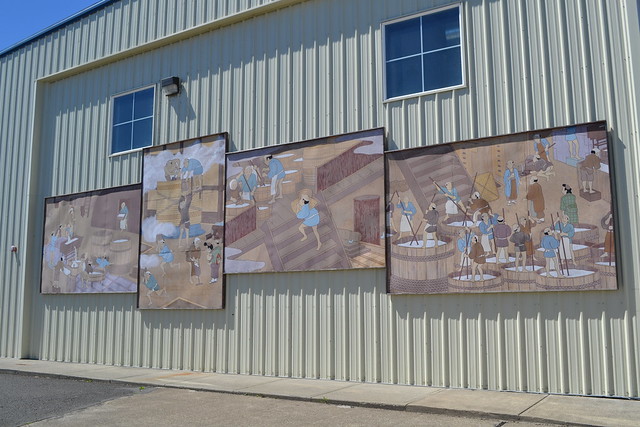 The philosophy at Sake One is to make sake for the U.S. market. They are not trying to make Japanese sake, they are making sake for Americans. This made a lot of sense to me, considering that so many wine makers and beer brewers in the states have been doing this for decades -- they aren't just copying European styles, they are instead making it for the American consumer, with their own hands. Our tour guide Brian was kind enough to take us through the whole brewery. 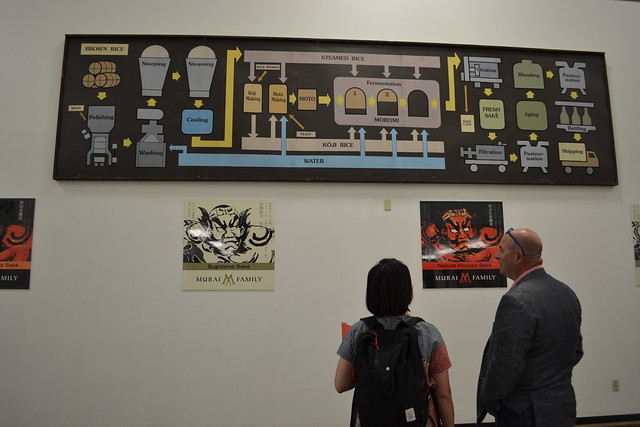 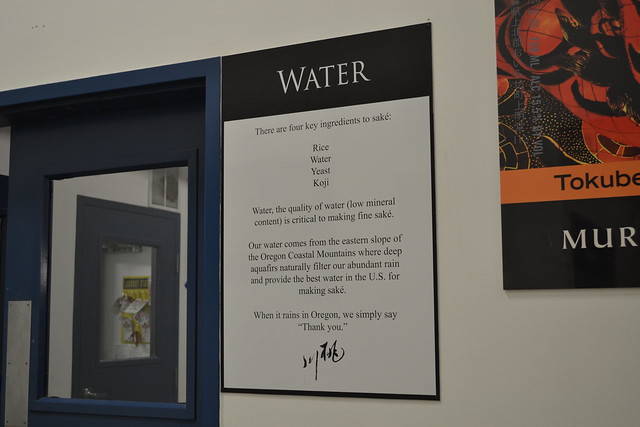 Starting a sake brewery in the Willamette Valley was not a coincidence. Forest Grove gets 80-120 inches of rain per year and is on the eastern coastal range, making it ideal for sake making. The water in the region has a lot of minerality in it, allowing for Momokawa's bold and robust flavors. But they still have to filter out the chlorine and flourine before actually putting it into the sake. That's what this machine does (not your average Brita water filter): 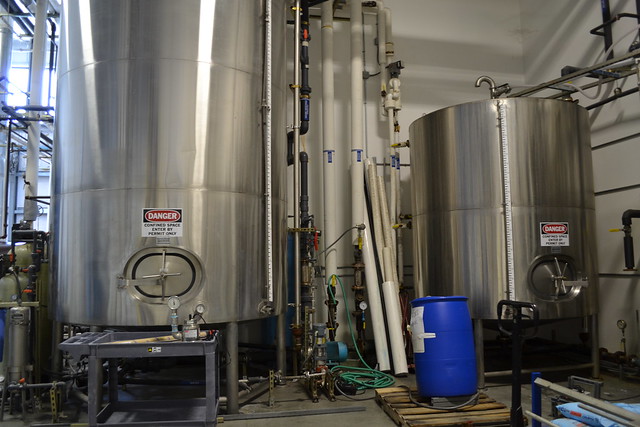 RICE The rice comes from the Thompson Family in Sacramento. Like many sakes made in the U.S., the type of sake used for brewing is Calrose. However, some exciting developments in the past couple years have made growing the prized sake rice, Yamadanishiki, possible here in the states. The debut of American Yamadanishiki will certainly propel the U.S.-sake making world forward. Until that day arrives, most sake makers, including Sake One are using Calrose. 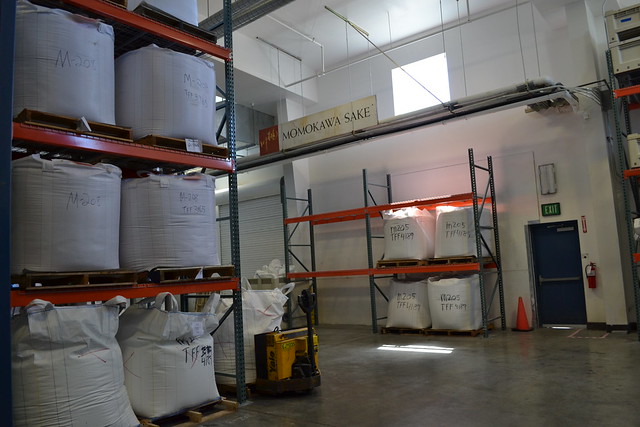 Rice must be milled before making sake to remove their outer layers. Removing the outer layers, which contain mostly protein and fats, leaves the starchy core, bringing out more refined flavors like fruitiness or floral aromatics. Here is there milling machine control panel. 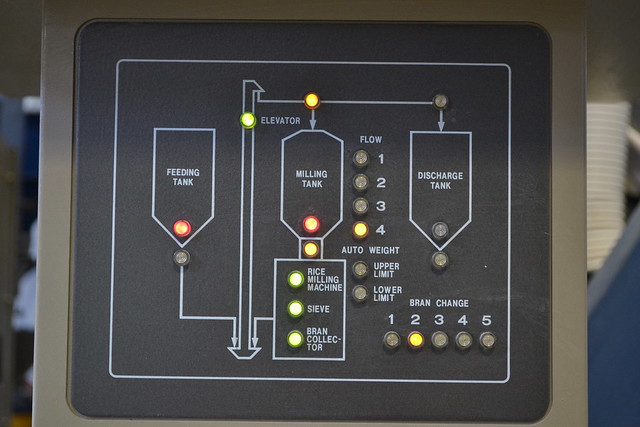 These are the grinders inside the milling tank. 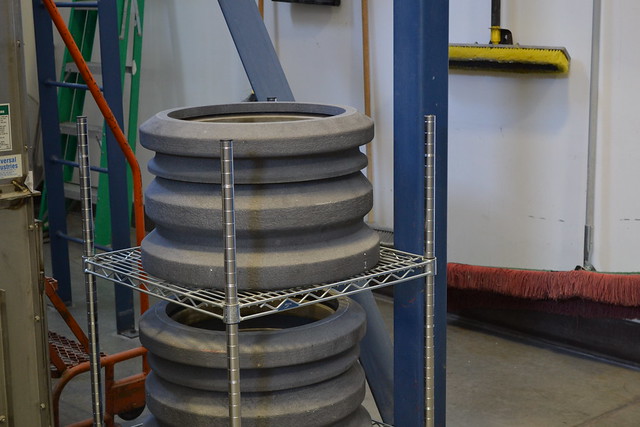 The dust that comes from the milling is given to nearby ranchers for feed. (In Japan, this is a lucrative product, whereby sake-makers can sell the powder to rice cracker or mochi producers). These are the feeding tanks that feed the milling tank. It looked like something Dr. Evil would own. 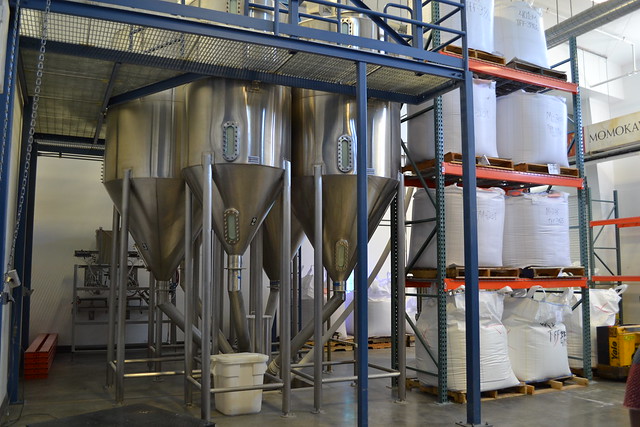 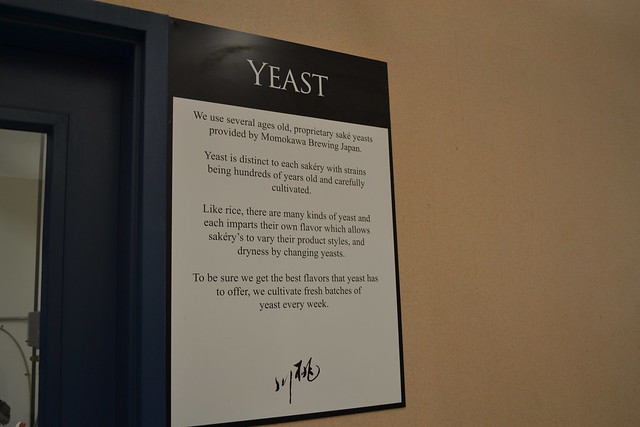 Onto the yeast propagator... which also looked like something Dr. Evil would use. But instead of yeast, he would propagate some kind of virus. 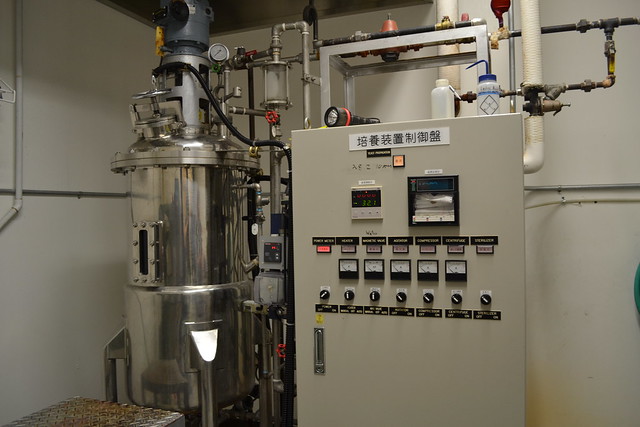 Anyway, propagating yeast in house is pretty unique for a sake brewery. Kayoko and I have visited a lot of sake breweries in Japan and this was the first time we had seen this. Usually their "yeast section" is just a shelf with a bunch of vacuum sealed packets of yeast. This propagator takes about two ounces of yeast and after 24 hours, like magic, yields one kilogram of new yeast. The yeast propagator was pretty impressive and felt very DIY of Sake One. Welcome to 'Murica, where we propagate our own yeast. KOJI This koji room was built by a sake otaku who works at Intel. He studied koji rooms in Japan and built one that integrated the hygiene of an Intel factory. 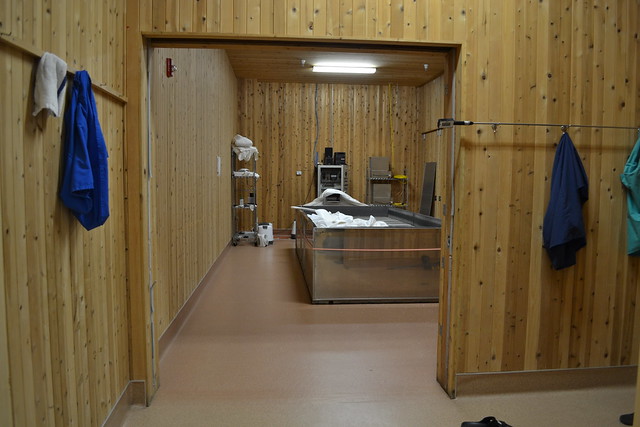 This could be Intel. 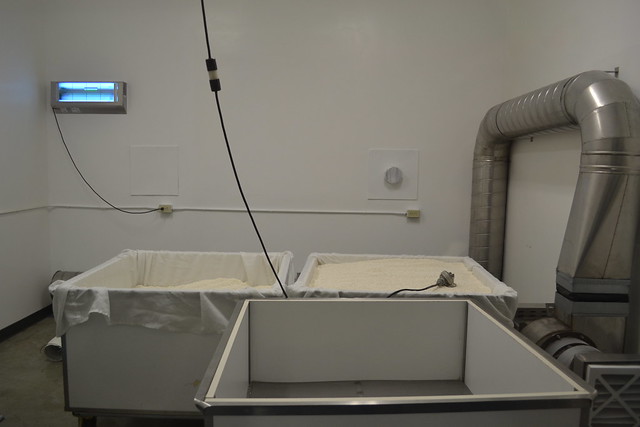 The rest of the tour consisted of looking at bubbling tanks full of fermenting sake... 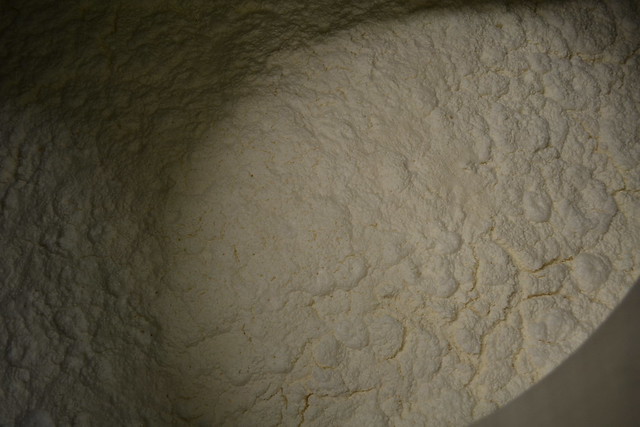 ... Watching a worker cleaning our the Yabuta press that filters out the lees... 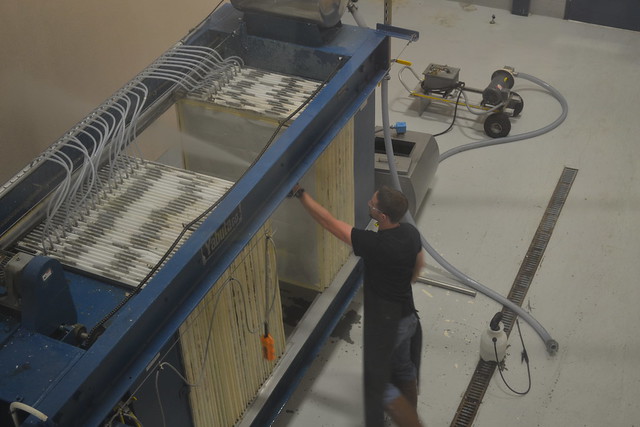 ... Seeing their state of the art pasteurizer... 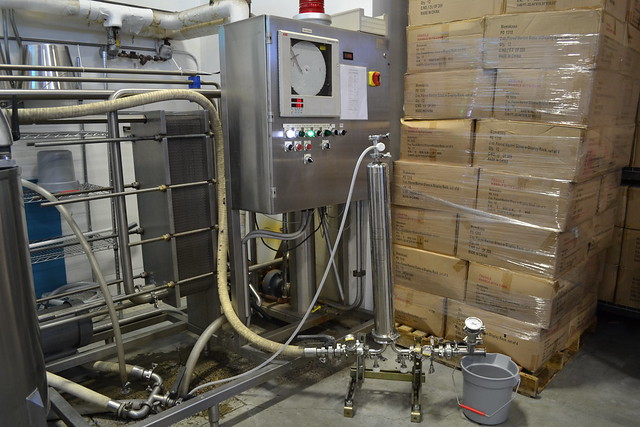 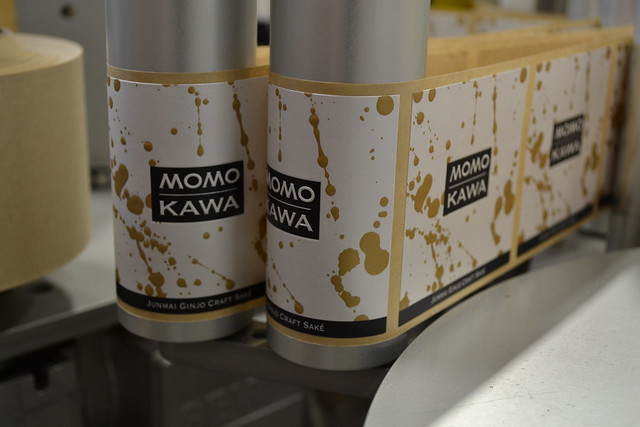 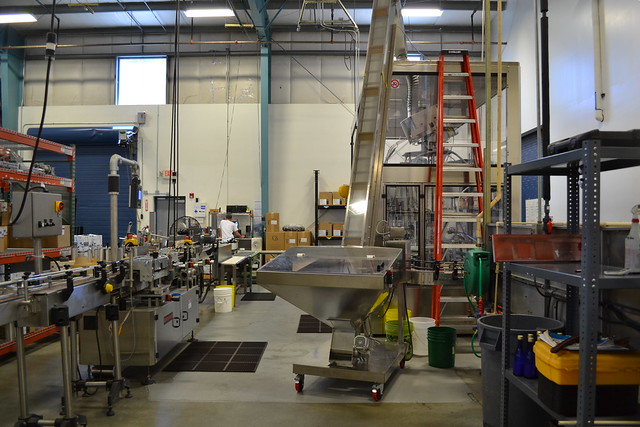 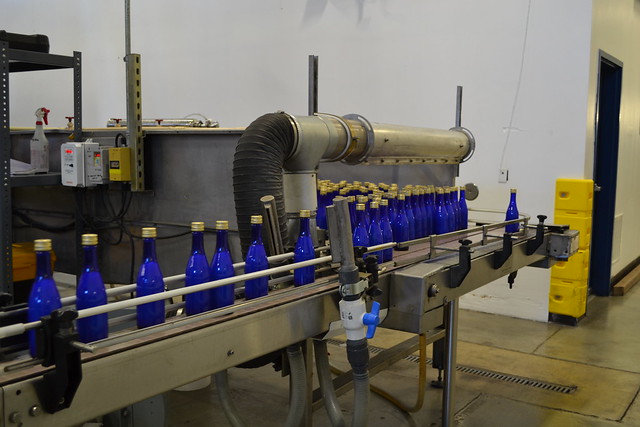 ... And watch the boxes getting stacked. 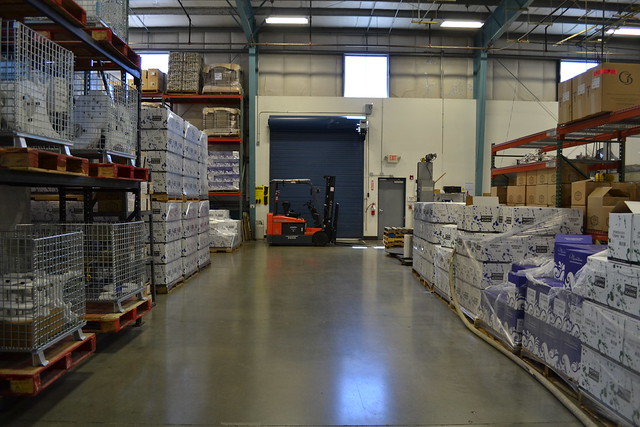 A sake brewery tour, in Japan or America is never complete without a tasting. The Sake One brewery has a beautiful, bright tasting room that Kayoko and I spent the rest of the afternoon. 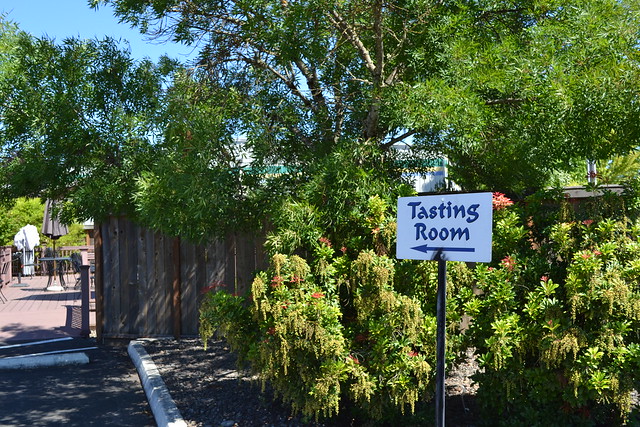 There was a Nama-Nama (truly unpasteurized) on tap, the day we visited. They even had growlers for regulars to come and fill up on the freshest sake possible (you can see them in the photo below on the right side). 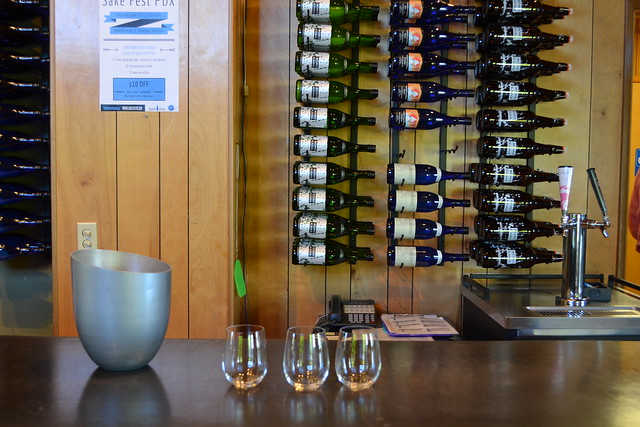 While we enjoyed our drinks, Brian was describing that Momokawa sakes are brewed to taste saturated, bold and rich, so that they pair well with the bigger flavors that are enjoyed in the states: meat, cheese and tomato sauce. It began to really make sense that Sake One and many other brewers in the U.S. are deviating from the traditional sakes of Japan and are coming up with their own styles. It's exciting to see the popularity of Momokawa Pearl in the U.S., a nigori genshu (unpasteurized, cask-strength sake) that pairs really well with barbeque. Wouldn't it be boring if American beer brewers just imitated the Germans or American wine makers strove to make the same wines from France? If that were the case, Russian River Pliny the Elder, or Broc Cellars Cab Franc would never exist. What a sad world that would be! Touring the Sake One brewery was truly inspiring for the state of sake in the U.S. Without trail-blazers like Sake One, it'd be a bland world. 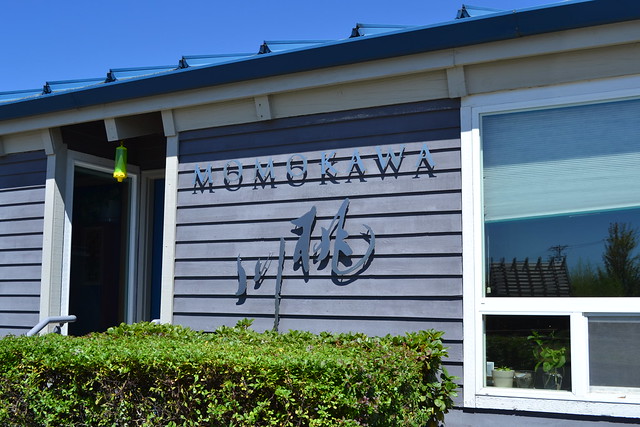