For years, I longingly listened to my grandma's stories of her golden years in Shanghai. Her sudden move from rural Japan to French Concession Shanghai in the 1930's exposed her to opera, Gauguin and film noir. Before she met any friends or her future husband, this cosmopolitan city was her first love in a new land.

It's crazy to think that 80 years later, I was able to explore those same streets, parks and alleyways. The sky scrapers in Pu Dong weren't half as captivating as the tree-lined Fuxing Middle Road packed with bars, boutiques and dim sum stalls. Incidentally, Fuxing Middle Road was the former Lafayette Street, where my grandma used to live.

After arriving at the hotel, I was famished. We wanted something quick and close. This first stop became our go-to throughout our 6 night stay in Shanghai. It was a quick service chain restaurant called Feng Yu. Lines of people of all types -- men, women, elders, groups of friends and singles were lining up outside the door. The line was moving so quickly that we weren't even ready to order when we got to the front of the line.

Panicked, I pointed to a few things on their photo menu including the noodles with a side of pork liver or 澆頭面.

This was a meal fit for a construction worker -- a generous helping of fresh noodles with pork liver as a "condiment." There was no hiding the fact that this was pork liver either; the aroma was quite pungeant and I could only have a few slices. As a huge fan of liver, Washi was all over it.

We also got a bowl of wontons. Wow! These delicate little packets of chicken and greens were more up my alley.

The translucent, thin skin danced around gracefully in the soup. Dipping these babies in a little bit of vinegar was heavenly. My mouth is watering just thinking about it. You know how sometimes there are gross hard fatty bits in your wontons or dumplings? These DID NOT have any! The filling was tender and lightly seasoned.

It didn't take long for me to go back to this place. In fact, I went back the next morning at 6am while on a morning walk. I picked up these sticky rice shumai.

After walking around to a few spots in the morning, it was clear that Shanghainese are powered by carbs. This carb-in-carb treat was perfectly seasoned with soy sauce and dried shrimp.

We returned for the third and final time two days later to have the shengjian mantou (SJB aka Sheng Jian Bao) that people were obvious cuckoo for in these parts. 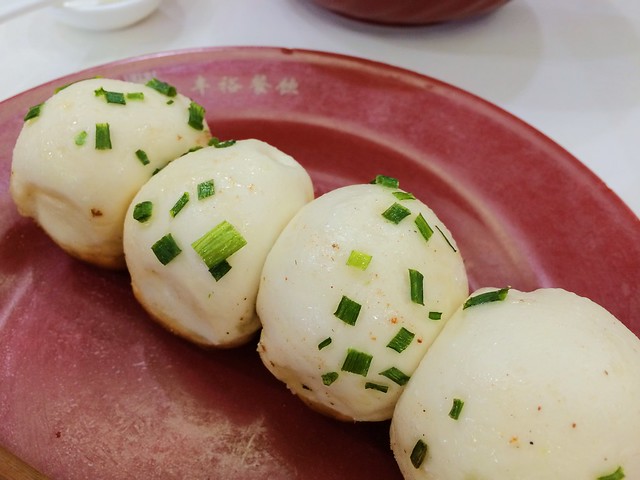 This is a Shanghai specialty breakfast food and I was ashamed to have never known about these even as a half-Chinese person. These spherical pan-fried dumplings are a marriage of fried potstickers and xiao long bao aka XLB (another Shanghai specialty). As with an XLB, you have to be careful when biting into these -- you wouldn't want to miss a drop of the liquid umami within.

XLB are good, but why do they get all of the attention? SJBs deserve their time in the spot light. Especially if they are as good as the shengjian mantou here at Feng Yu.

I also got a little pastry to go along with my dumplings. This pastry was so flaky, thanks to some serious usage of oil. The filling consisted of green onions and egg yolk for a slightly crumbly, divine texture. See how this pastry just flaking out in this photo?

Washi also ordered this bowl of noodles that were bathing in a slightly sweet broth.

The house made noodles were the same ones as we had during our first visit. Thin and firm. The topping was kind of like Japanese fukujinzuke (finely chopped lotus root pickles often eaten with curry) except I'm pretty sure they were bamboo shoots. After not having many sweet-flavored dishes in China, this was a nice surprise. Perhaps this would do well in Japan.

I'm guessing that Feng Yu is a pretty run of the mill spot given it's a chain. The fact that this place impressed me on my first day told me that Shanghai was going to be a great food city.

A special thanks goes out to my mom's cousin who helped me decipher the kanji reading of Feng Yu. Without her help I would not have been able to track down the address below! 謝謝 (xièxie)!