Louis Anderman is a scientist. Born from a true passion for bitters, Miracle Mile Bitters Co. started out as a hobby (just like us!), as Louis concocted potions from days of yore, right in his kitchen. Miracle Mile now leads the west coast bitters revolution with his small batch recreations of classic formulas and top secret recipes.

I first encountered Louis' Yuzu bitters (with Label Design 1.0) at Bar Keeper in Los Angeles in early 2010 and I knew we would want to carry them once we opened up our shop in Oakland. As his business has expanded internationally since then, Louis kindly keeps Umami Mart on his priority list, giving us first dibs on his very limited edition, ultra-VIP bitters (Ume! Red Eye! Celery!). We are proud to carry all of his bitters that are available, and the Yuzu remains our best seller. 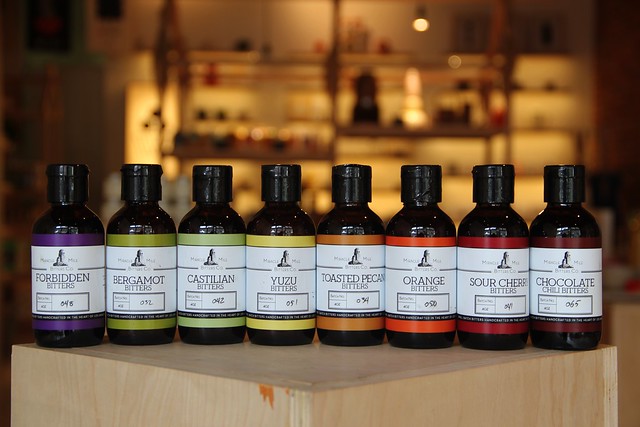 A tireless gentleman of Los Angeles, it's not hard to find Louis: hard at work in his lab -- cooking, bottling and shipping; at a bar seated in front of one of his many favorite drink-makers; in his kitchen torching a piece of finely sous-vided meat; or in front of the TV watching a kung fu flick from the 70s. Louis has many passions, and we could chat all day about any number of subjects. But nothing seems to make his eyes light up more than talking about his bitters. I asked Louis a few questions about his bitters, and what he wants most for the holidays.

What was the very first batch of bitters you made, and how did it turn out?

The first batch I ever made was probably about 8 years ago, and it was the Regan’s Orange Bitters No. 5 recipe available on his website. They weren’t half bad for a first try. The first original recipe that I was truly proud of was the Chocolate/Chili Bitters, and that’s the one that launched the company.

Which of your bitters is your favorite?

Unfair question!  That’s like asking a parent which is their favorite child, so I’m not going to give you a simple answer. Right now, I would say that I’m most proud of the Redeye Bitters. They were my toughest R+D challenge (replicating the tobacco flavor was relatively easy, getting that tannic dryness on the finish was the hard part), and I really love how they turned out. However, if it were Sophie’s Choice Time and I had to pick just one, I would probably go with the Forbidden Bitters. I think they’re my most versatile across a wide range of base spirits.

What is your favorite drink to make? Mind sharing the recipe?

My usual pre-dinner go to is a 2:1 Martini, Beefeater:Dolin Dry, dash of Orange Bitters, olive and a lemon twist. 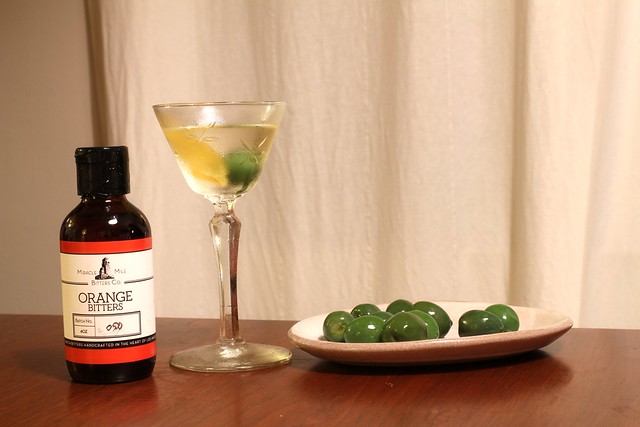 Next to that, an Old Fashioned. I love playing with different base spirit/bitters combos, trying to find the ideal pairing. One of my current favorites is Balvenie Caribbean Cask with the Toasted Pecan Bitters. 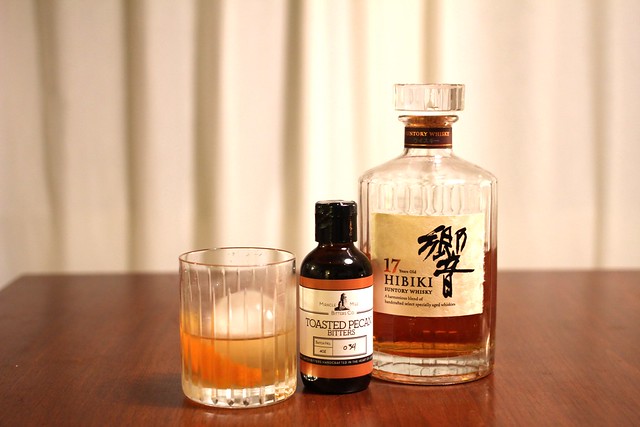 Kayoko: I used Hibiki 17 which has a plummy note. Delicious!

I’m also rather obsessed with the Fourth Regiment, which is the only pre-Prohibition cocktail I’m aware of which calls for three different bitters (and it’s also delicious). I like to make it with 1.5oz Rittenhouse, 1.5oz Carpano Antica, 1 dash each Forbidden, Orange and Celery. Stir with ice, strain into chilled coupe, garnish with a lemon twist. 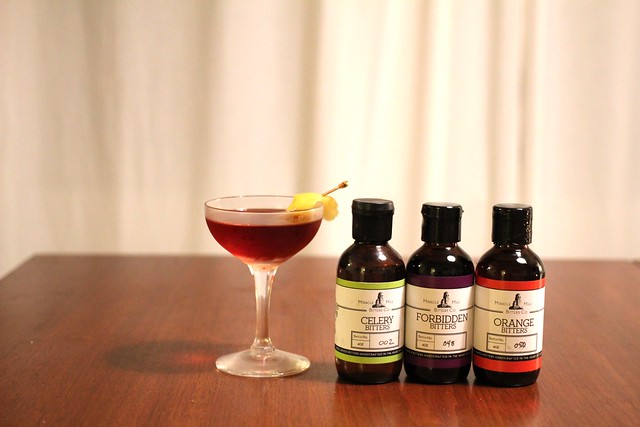 If you could grab a drink anywhere in the world, where would it be? What would you order?

Soooo many to choose from, but right now I’d love to visit Bar Trench in Tokyo. I became aware that they were using a couple of my bitters when I saw a tweet from the head bartender, Rogerio Igarashi Vaz, using the Forbidden Bitters. We became friends on Facebook, and now whenever anyone I know goes to Tokyo, I make sure to send them over with a care package for Rog and the bar. I think it’s about time that I make the next delivery myself.

What's on your wishlist for the holidays??

I may just end up treating myself to a PS4. It can get lonely and boring in the lab, so I wouldn't be opposed to something to blow off some steam. Also, I need a really, really long massage. My shoulders and right wrist are a wreck from the bottling/labeling marathon I've been on the last few weeks.

Stir with ice, strain into an Old Fashioned glass with fresh ice, garnish with orange and lemon twists. This one made Gary Regan’s 101 Best New Cocktails of 2013. 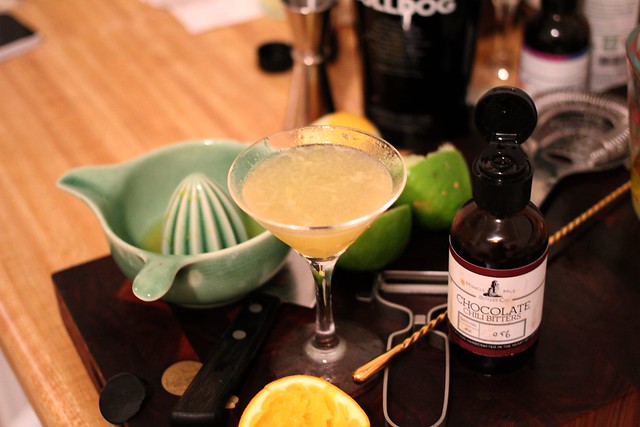 Shake with ice, and strain into a chilled cocktail glass. Garnish with freshly grated nutmeg. This one sounds really, really weird on paper, but it works. Oddly, if you didn’t tell me what was in it, I would have guessed gin and pineapple juice.

Something Classic
Created by Zahra Bates, The Pikey

Stir with ice and strain into a chilled cocktail glass. Garnish with a grapefruit twist.

Zahra has one of the most amazing palates of anyone I know, period, and I love watching her mind at work. The best way to order from her is not to name a drink, but to ask for ‘Something (fill in adjective)’. Sitting in front of her one night, I asked for ‘Something Classic’, and this is what she created. There’s also a Rye-based ‘Something Classic #2'.

We're happy to announce that we have the Miracle Mile limited edition Redeye and Celery bitters in stock at our Oakland shop only! They will not be available online or San Francisco. 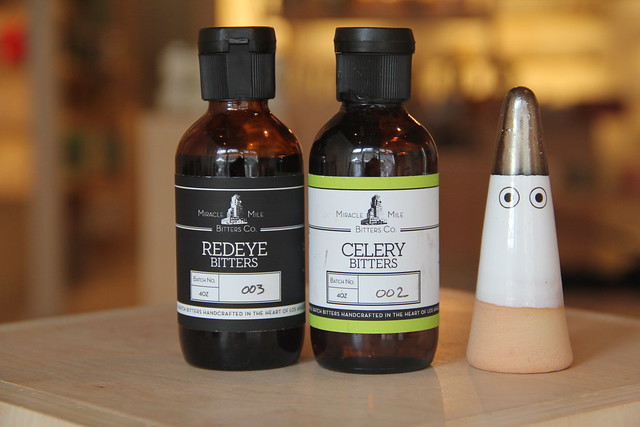 Here's what Louis has to say about the Redeye bitters:
"They're based on a not for sale, friends and family only formula that I called the 7 Deadly Bitters, which were fat-washed with Neuske's bacon fat, and infused with Perique tobacco and finished with Intelligentsia Black Cat espresso. For the Redeye, I still do the fat washing and coffee, but had to R&D a tobacco substitute so I could have something that I could sell without the TTB, FDA, and ABC knocking on my door. The flavor was actually the easy part, the hard part was getting the dryness on the finish from the tobacco, but I finally cracked it after a few tries."

I made the most decadent Manhatten ever with the Redeye bitters:

As for the Miracle Mile Celery bitters, I've asked Louis many times over the last few years to make a batch of these for retail. It is savory and a bit spicy, so there's a lot of room for creativity in cocktail-making. Louis is adamant about finding the best ingredients and for the Celery bitters, he must find celery stalks with the leaves still in tact. He finally found some and has made a case available to us.

My favorite drink with the Celery bitters is a glass of Cocchi Americano, 2 dashes of the bitters, and a splash of soda:

The Fourth Regiment cocktail mentioned above is also delightful.

And finally, Louis will be guest bartending at Harlowe, in LA on Tuesday 12/16 -- an annual birthday tradition. So LAers, please go out and wish Louis a HBD and have him make you "Something (fill in adjective)."

You can always buy Miracle Mile bitters at our shops or online. We've also put together a Miracle Mile Gift Set, just in time for the holidays.