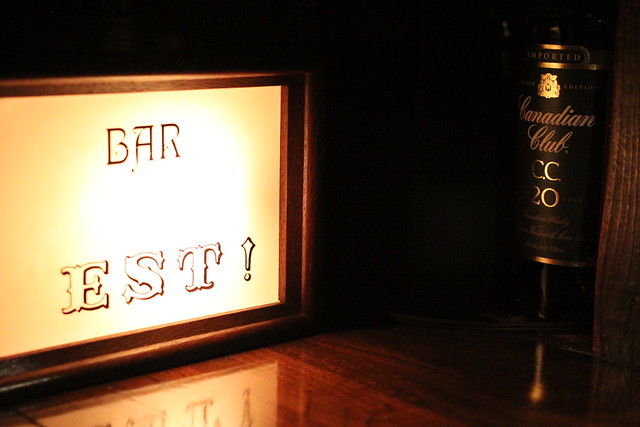 Looking back on our trip to Japan in February, the most memorable cocktail was at Bar EST!. A short distance from the Yushima train station in Tokyo, EST! is a dark, tavernous space filled with men drinking a scotch on the rocks and smoking cigarettes. 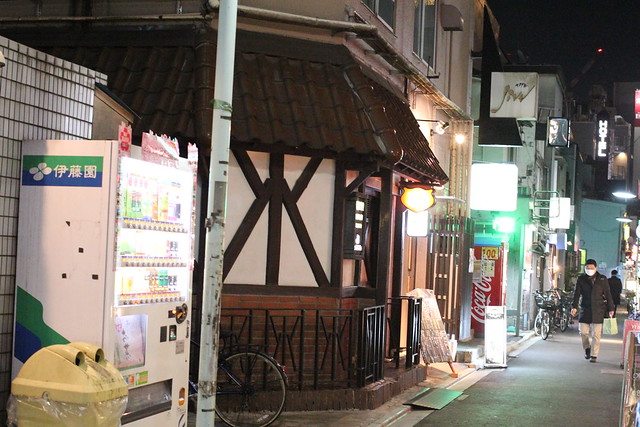 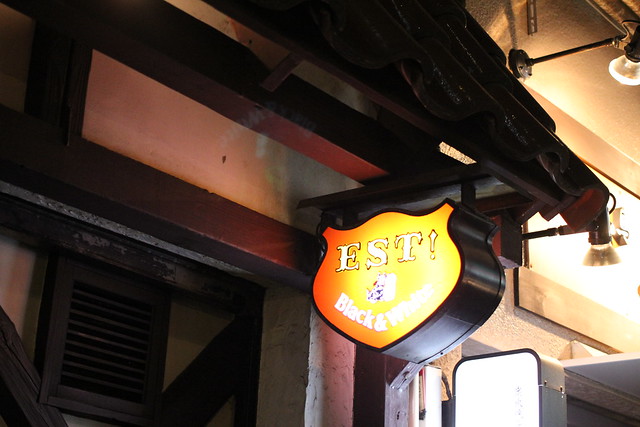 At the helm is Akio Watanabe, "master" aka owner of Bar EST!, still behind the bar stirring drinks at 81 years old. 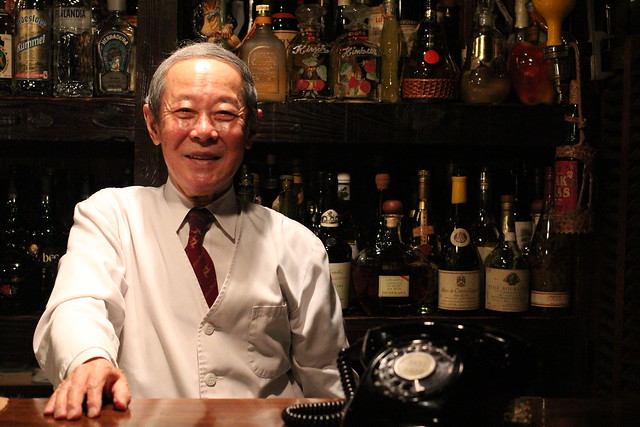 Mr. Watanabe opened EST! at this location 40 years ago! We were lucky to land a seat at the bar on a Friday night in front of Mr. Watanabe and his son Munenori, who owns another bar in Tokyo but was there helping his dad out with the crowds. Mr. Watanabe mentioned he is short-staffed and that it is hard to find new hands in the cocktail industry.

As soon as we sat down, Mr. Watanabe rushed over to us to hand us some oshibori (hot towels) and immediately made us feel welcome. Talkative and generous, Mr. Watanabe has a relaxed demeanor behind the bar. Many cocktail bars in Japan can be very uptight; Mr. Watanabe clearly just wanted his customers to have a good time. 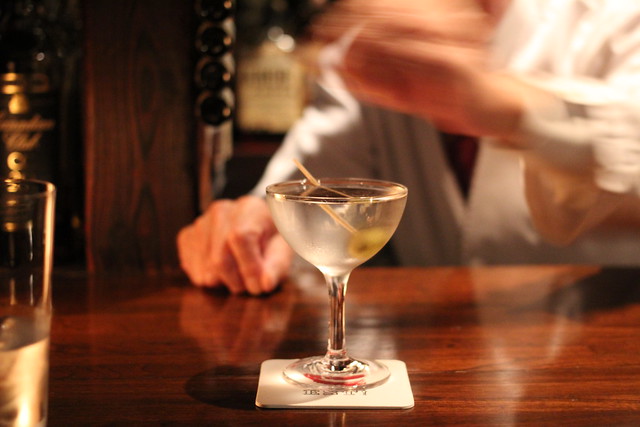 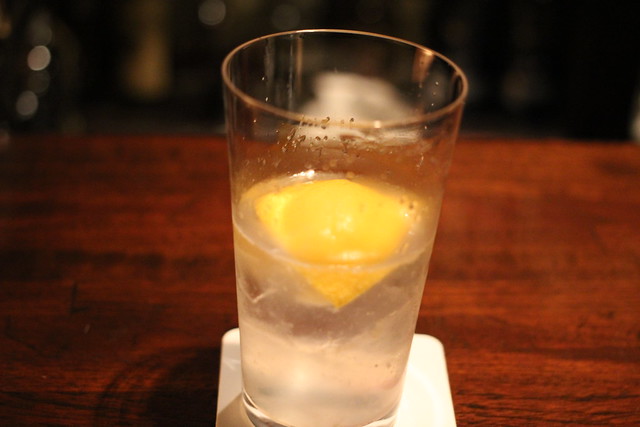 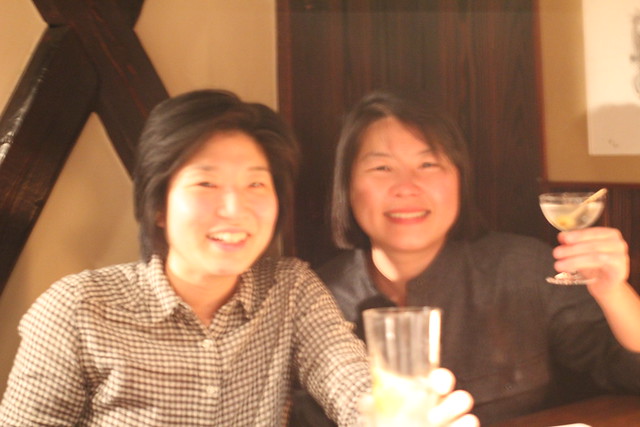 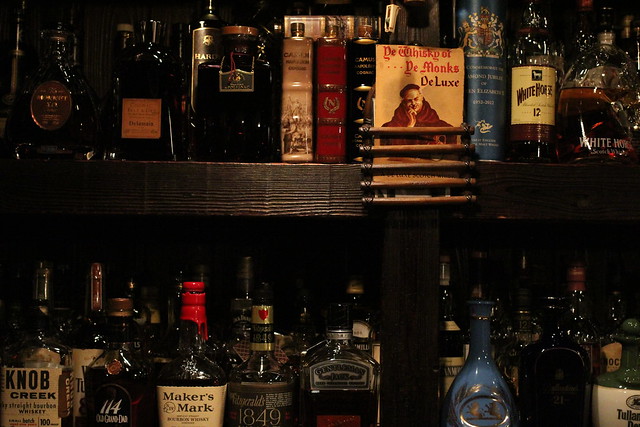 Impeccable bottles, not a speck of dust in site 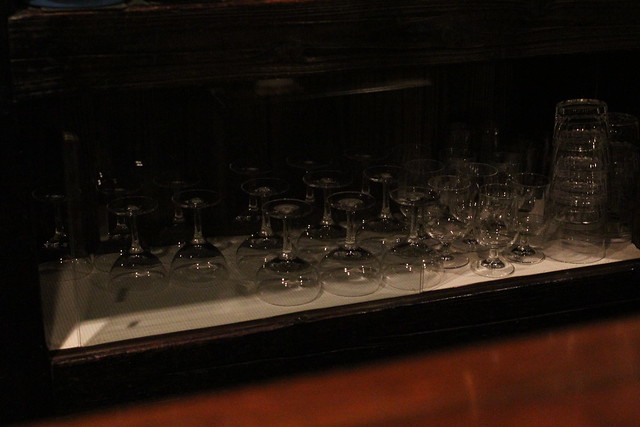 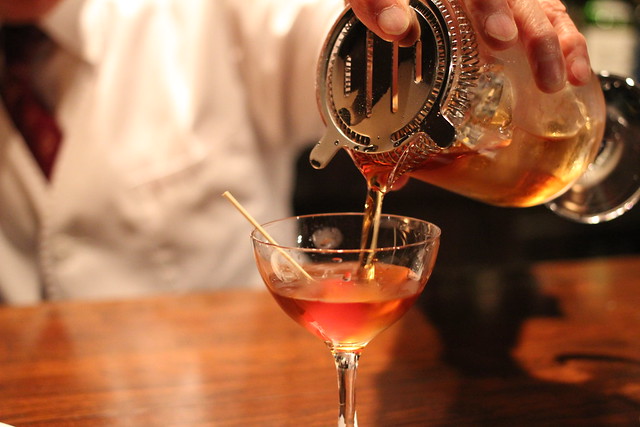 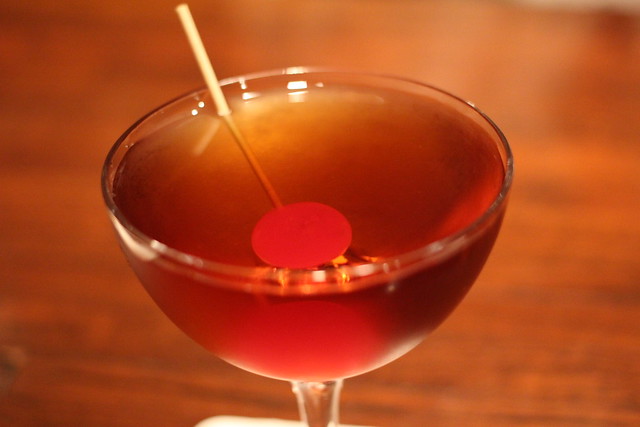 I asked Mr. Watanabe of what "Est" meant. Established??? No. He says it is latin for "to be!". Of course I love the bar more after this fact. 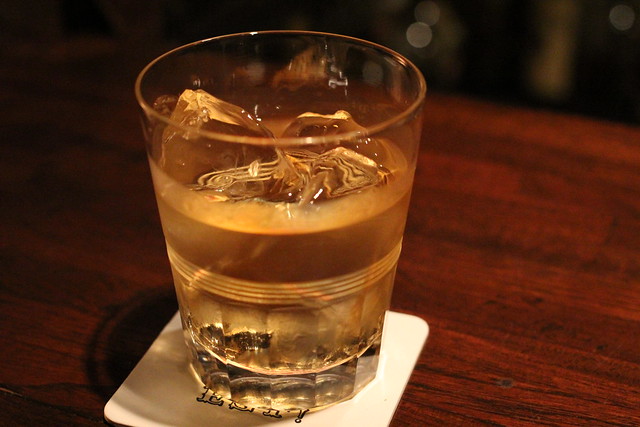 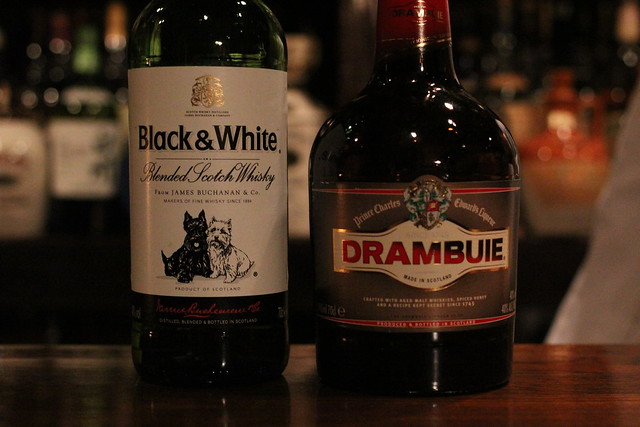 The bar may have been sponsored by Black & White at some point in their 40 year history, as there was signage everywhere with their branding. 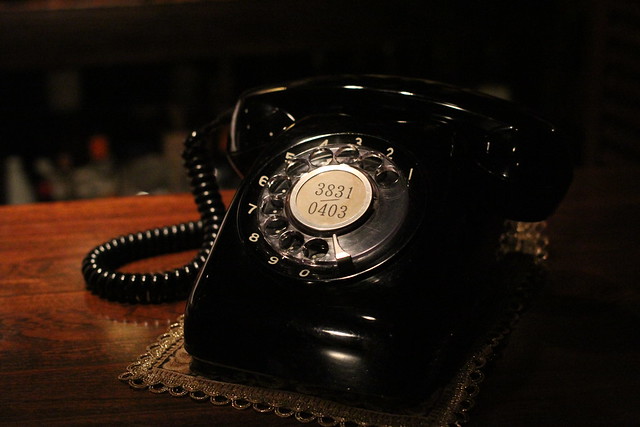 The telephone from when they first opened, with the same phone number for 40 years. 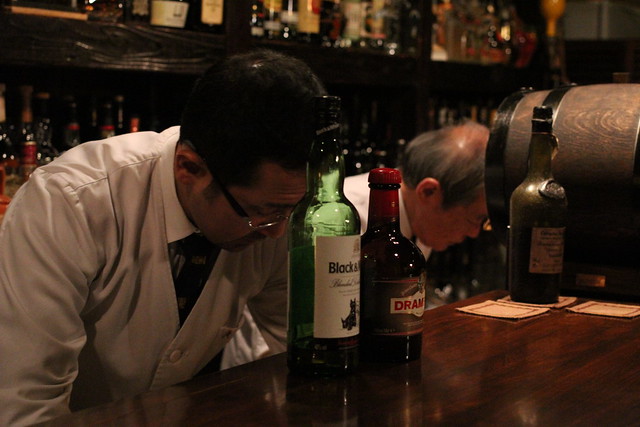 Mr. Munenori and his father, working behind the bar

While I watched the father and son team working, I wondered what it must have been like to have a bartender dad growing up. It is rad that Mr. Munenori followed in his father's footsteps and also pursued bartending. His own bar is called Bar Atrium in Shimbashi, Tokyo. 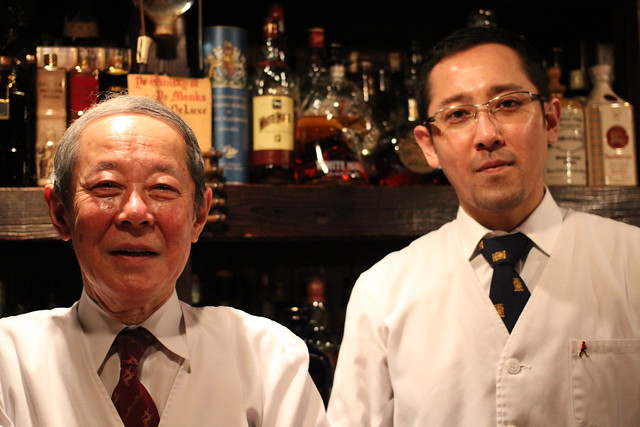 Mr. Watanabe told us that he had been open 7 days a week until recently, when he fell ill. So he finally decided to close one night of the week. He says he gets to the bar around 2pm, opens at 6pm and takes a short cab ride home after they close at midnight. 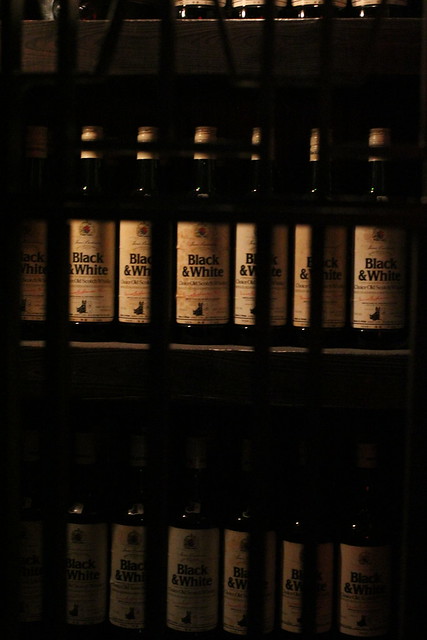 Old bottles of Black & White scotch gated off in the entrance 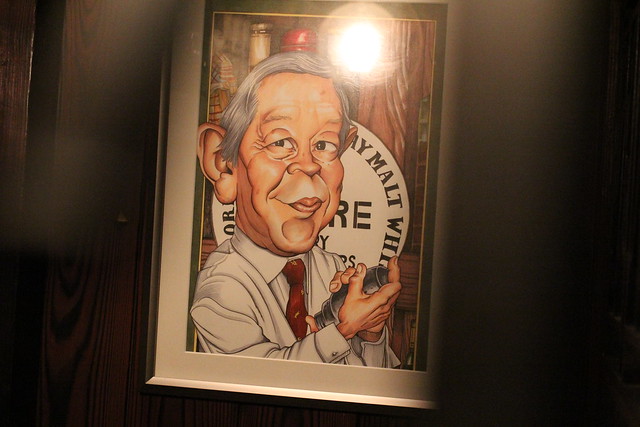 Yoko and I truly enjoyed our drinks and experience at EST!. Mr. Watanabe is such a gracious host, we were so warmed by his spirit and infectious energy. We talked to him about our company and he was so intrigued and encouraging about us importing bar tools from Japan. He even offered us his Stem Mixing Glass! Mr. Watanabe is truly one of a kind and I feel lucky we were able to meet him.

He walked us out of the bar and of course we had to take photos with him to commemorate our visit. 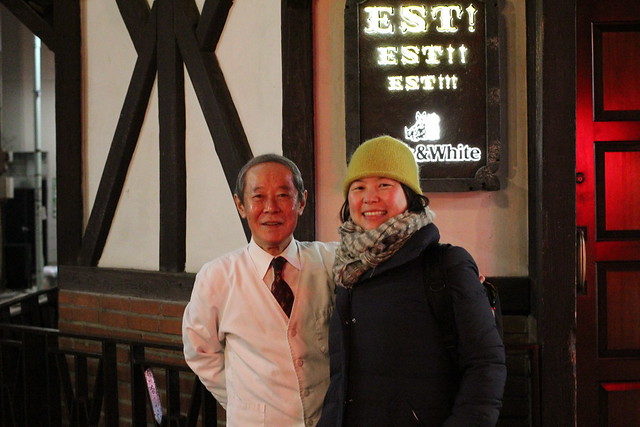 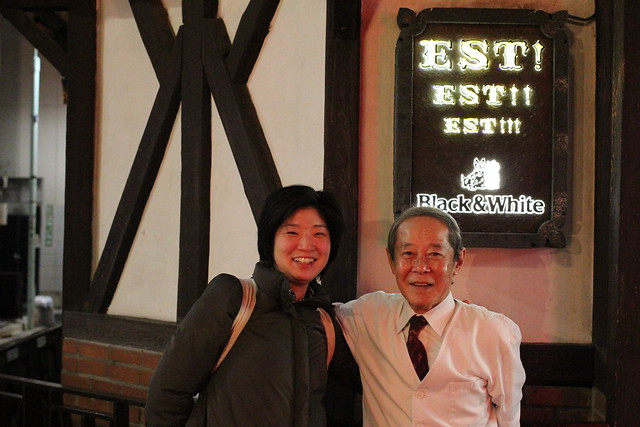 Don't take just our word for it: EST! has FOUR stars on Tabelog, Japan's version of Yelp. However, the Japanese are the toughest critics and they don't just dole out their stars. I have seriously NEVER seen anything over 3 stars on any restaurant or bar on Tabelog. So it's saying a lot that EST! has four stars.

Please visit Mr. Watanabe if you are ever in Tokyo. Tell him the Umami Mart girls sent you! You will enjoy every moment of it.