By Yamahomo
Originally posted on April 21, 2008

I must master this. I think I came pretty close to what macaron should be on trial 3, but I mixed the batter too much, hence it was too thin. Over the weekend, I made it three times.

Here is how it went.

Note: I found Laduree's recipe, and followed the measurement below.


Trial #4 (Saturday morning)
I had a fried chicken party planned for the evening, and thought I would make macarons to contrast the very Americano dinner. I measured everything Friday night quite intoxicated, yet sober enough to be able to see numbers on the kitchen scale. I woke up not too late Saturday morning, and started making the batter. I might have been still drunk, but I tried to remember the process, not to mix too much, yet mix it enough. I thought I did it just the way I should, but something was off. While the macarons were resting after I piped them out onto a cookie sheet, a horrifying thing happened. Every one was connecting to each other! Did I mix too much? What the fuck is this ugly surface? I did rest this for 45 minutes so that the skin can form on top, but somehow, somewhere, I fucked it up. 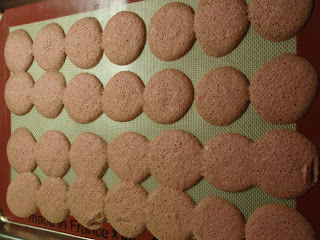 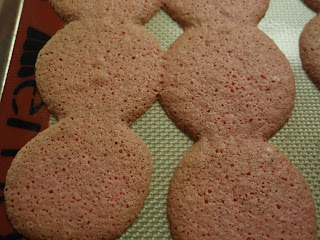 Trial #5 (Saturday afternoon)
Show must go on. Despite my utter failure in the morning, I had to have dessert for the evening's gathering, and I was determined to make another batch successfully. So I measured everything again, waited till the egg whites were room temp (some recipe says to leave egg whites in room temp over night, but I didn't have the time. Also American eggs are not that fresh, so it is fine to wait until it gets room temp), then started all over again. This time, I used cocoa powder to make chocolate macarons. My determination won the battle. It wasn't runny, it was thick enough to hold the shape of cookie, HUGE leg action happening as well. Some sticking to each other, but it's ok... 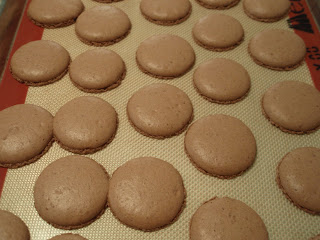 I haven't gotten into the cream making part yet, so I, again, made raspberry jam with whipped cream mixture, and sandwiched it. When making macarons, always rest it for 24 hours (or over night). It really changes the texture. When it's assembled, it's still chewy, but after resting a while, the whole thing becomes a 'macaron', not 'macaroon'. I served this after fried chicken dinner, and everyone was amazed. One of my friends, Tonny used to live in Paris, and he said it was one of the best! Yamahomo finally achieved the Laduree level. 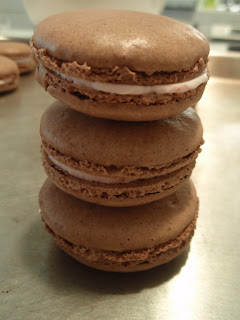 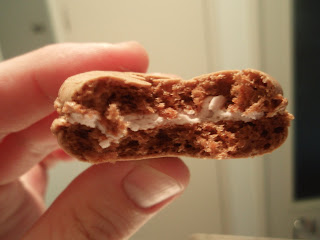 Trial # 6 (Sunday)
We ate them all Saturday night, and I had to prove that I can make successful macarons every time from this time on, so that I can get into the cream making business. In order to perfect everything, I went to kitchen supply store, and bought 1cm piping tips, sifter, then went to Williams-Sonoma and bought a $27 cookie sheet. Real macaron businesses starts from buying all the necessary equipments no matter how expensive it might be...

I am getting to the point where I can pipe out almost identical rounds, too! This one has matcha powder. Using round piping tip is definitely a good idea. I was just cutting a whole in zip-loc bag before, but this makes real rounds. 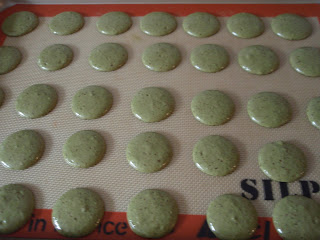 The legs are just so perfect, and I cried a little. 6 trials, and I came to perfect macaron making. Now I can move onto different flavors and different creams. Where can I buy these fancy boxes that Laduree's macarons come in? 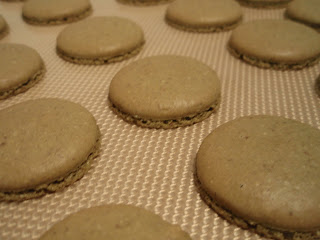 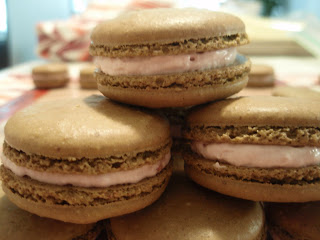 By the way, I have 12 egg yokes in the fridge. I need to come up with a recipe that requires many egg yolks.