The sake scene in New York City is dynamic. When I lived there from 2002-2008, the sake trend was definitely in development, and as a worker-bee in Midtown Manhattan, I was fortunate enough to spend many a late-nights at Sakagura, one of NY's famed sake bars and other Japanese watering holes in the area. There were many Japanese companies set up in Midtown back in the day, so there are a lot of great izakayas in the neighborhood.

Fast forward to 2016 and there are sake bars all over Manhattan now! On Yoko and my trip to the East Coast earlier this year, we were able to visit many sake bars – institutions and newbies – like Decibel, Shigure, and SakaMai.

But what made the biggest impression on us was Sake Caliente, a late-night pop-up in the East Village specializing in, that's right – hot sake. Sake Caliente is hosted by Chizuko Niikawa-Helton, a Sake Samurai, who was the sake sommelier at Sakagura for years before branching out on her own as a consultant for other companies and restaurants to build their sake lists. She is also a co-founder of Sake Journeys, which offers tours to sake breweries throughout Japan. All in all, she's a RAD LADY and so knowledgeable about sake. Sake Caliente pops up at Azasu, a casual izakaya, on Saturday evenings at 11 p.m. Chizuko starts the event late to attract industry clients from all over the city. She sets up her sake warming station at the entrance, with the night's offerings proudly lined up. A table is set up with all sorts of otsumami (appetizers), perfect for sake accompaniment, like assorted pickles. In addition to the selection of isshobin (1.8L bottles) of sake for the evening, Chizuko always sneaks in a few special bottles that she calls her "Secret Sakes."

This one above is an undiluted bottle of Iwanokura 13, brewed by Tenzan Shuzo in Saga, Japan. Chizuko says, "Low alcohol content at 13%, but it's undiluted. Surprisingly juicy, and nice acidity. Not available in the U.S. I bought it when I visited the brewery last year." This one was a gem: Rakutenmei Kioke Junmai by Daishichi Brewery in Fukushima, Japan. This bottle was aged in kioke wooden casks, and one of only 744 bottles that was brewed in 2007. WOW!

There was also a special guest on this evening: Euka Isawa of Katsuyama Brewery in Sendai, Japan. 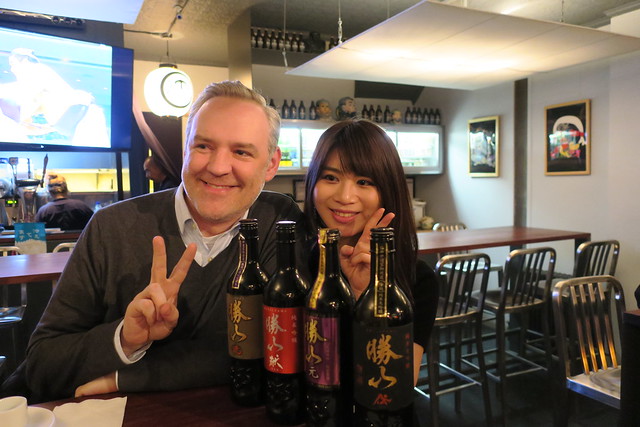 Katsuyama Brewery has a very long history dating back to the 1600s, when they brewed sake for warrior Date Masamune. This sake was brewed only for top generals and ruling families, so it has always been the highest of quality, and today continues to garner awards at major sake competitions (Mr. Parker also recently gave their daiginjo 94 points!). Chizuko also noted that the all black bottle (shown on the right, above) is said to have inspired George Lucas' vision of Darth Vader – with its all black body and the family crest. This is said to have mirrored Date Masamune's armor.

We met up with Tim Sullivan, our friend and Hakkaisan Brewery ambassador. We of course enjoyed the honjozo warm. The Azasu space is bright and has a welcoming and casual vibe. I enjoyed Sake Caliente so much that I followed up with Chizuko over email to ask her about her pop-up's origins.

Do you host Sake Caliente year round?

I usually exclude the summer season, but sometimes I open SC when sake brewers come to NY or some special event happens. In August, I opened SC for a Naraman special with the brewery owner from Yumegokoro Shuzo. Where did you get your inspiration for Sake Caliente?

Sake Caliente is a weekend pop-up hot sake bar that started Saturday on February 7, 2015 at Yopparai in the LES. (Current location is at Azasu in the LES, owned by the same owners of Yopparai). SC was established to let people experience the beautiful okan or kanzake (warmed sake) culture. Sake is unique in that it is the one kind of alcohol that is enjoyable at many temperatures – from icy cold to extremely hot. Unfortunately, many people in the U.S. thinks that hot sake is low-quality, or only for cheap sake. That's not true. Luxury daiginjo, ginjo sake, cloudy nigori, and fruity sakes such as umeshu or yuzushu are great for warming too. People just don't know the right temperature or how to warm them properly. I wanted to open their minds in a casual and fun way. Does the word caliente means something special to you?

When I was working at a restaurant, I learned some simple Spanish phrases from Spanish-speaking co-workers. I really love the sound, and "caliente" was my most useful Spanish phrase, especially when I needed to make warmed sake. Some of my co-workers and I who enjoyed warm sake created a team for researching okan sake. We looked into which sakes were best at what temperature, and the like. The team's name was "Club Caliente." So, Club Caliente is the origin of "Sake Caliente" and I dedicate my hot caliente passion to osake no kamisama (the God of Sake).

Another meaning is actually in Japanese. "kari" 借り(borrow), "en" 縁 (friendship), "te" 手 (hands). I can't do Sake Caliente without any of my restaurant friends, their space, and their hands. Sake Caliente is not open every Saturday, so be sure to check in with the Facebook Page and Instagram if you want to warm up with some sake, friends, and bites. Chizuko will be there to greet you, and if you're lucky, you'll get a taste of one of her "Secret Sakes"!