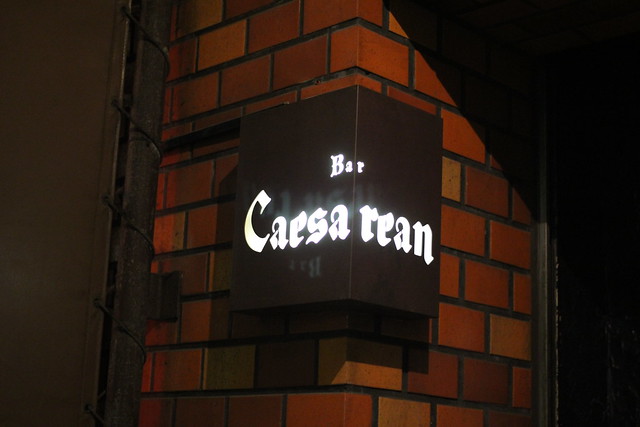 The name Caesarean derives from all things related to Caesar, the Roman general whose actions led to the rise of the Roman Empire. It does not derive from the caesarean section, which might have been more fitting, given that entering the bar felt like entering an altered womb-reality à la David Lynch.

To go into Bar Caesarean, you enter through two French double doors, which seems really out of place along this street full of tiny Japanese restaurants and kissaten (coffee shop) along the Odakyu Subway line in Yoyogi-Uehara. 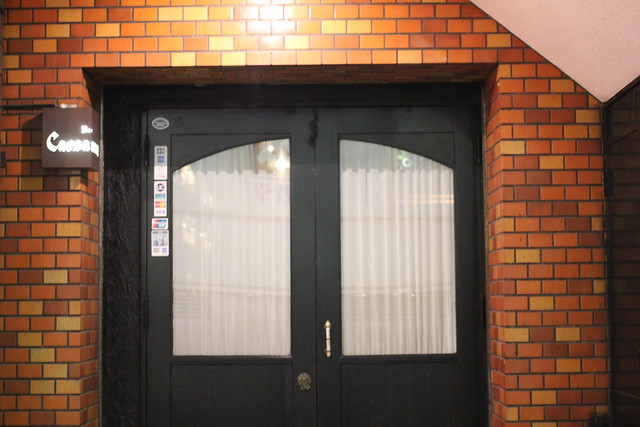 Once you've entered into the womb... silence. It may be one of the only bars I've been to that had absolutely no music. The silence was reiterated also because we had the bar to ourselves and there was no background chatter.

The ceiling, walls, floors and bar are all painted black, hence the womblike effect. Ironically, in this silent atmosphere there is an impressive "dance floor" for Tokyo standards (a good 100 sq ft or so) that awaits, untouched.

I couldn't get a good photo of the "dance floor" because it was so dark, but the mood was very similar to this:

Contrasting the black surfaces is Tanaka-san, the owner and bartender who started out under Kazuo Ueda-san of the famed Bar Tender in Tokyo. After his time at Bar Tender, he opened Caesarean -- 23 years ago. His silver grey hair compliments his freshly pressed white lab-coat and shirt. An interesting anecdote I read in the Japanese book To the Bar says that Tanaka-san, washes, hang dries and presses his white lab-coat every day. He swears by a crisp and consistent look everyday. His hospitality is a mix of elegance, precision and concentration. Like Caesar, Tanaka-san seems to be one to follow the code: Live by the sword, die by the sword. 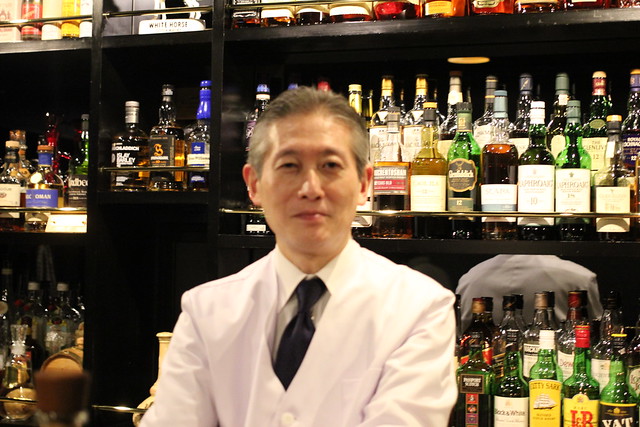 Tanaka-san (Excuse the out of focus photo)

An impressive amount of bottles line the walls including this gem: The Nikka 12 Premium Blended Whiskey. We have never seen this in the States.

Once we ordered, Tanaka-san sprung into action, carefully mixing and shaking each cocktail with subdued fanfare.

I asked for something refreshing. Since I was still getting over jet-lag, Tanaka-san gave me a low alcohol vodka grapefruit cocktail that would wake me up a little. Not too sweet and with plenty of clear ice, this was the perfect cocktail to give me just a little bit more energy to engage in conversation with friends for another hour.

I like the grapefruit cocktail (left) so much that I asked for another citrus fizz drink. The next one I had was a gin-fizz with an orange twist (right).

Kayoko was drifting off to a deep sleep due to jet lag, but could not leave before getting a taste of The Nikka 12.

After he presented us with the drinks, he moved into a dark corner, standing pensively -- perhaps thinking deep, philosophical thoughts like, "Does curiosity exist only if it is pursued?" or, "What would have happened if Julius Caesar survived his assassination attempt?" These thoughts were paused as soon as he noticed my water glass running low, and he silently brought a carafe over while the sound of clinking ice filled the air.

Visiting Caesarean was definitely like being thrown into an altered reality, with Tanaka-san sitting quietly in the directors chair, controlling every single sound, move and light pattern in the room. I wish I could have gone to the bar 21 years ago when it opened, just to confirm that it was probably almost exactly the same -- except with maybe a little less silver hair.

Another blurry photo for the road:

And a quote by the great Julius Caesar: "It is better to create than to learn! Creating is the essence of life." A fitting passage for a bartender of the womb.