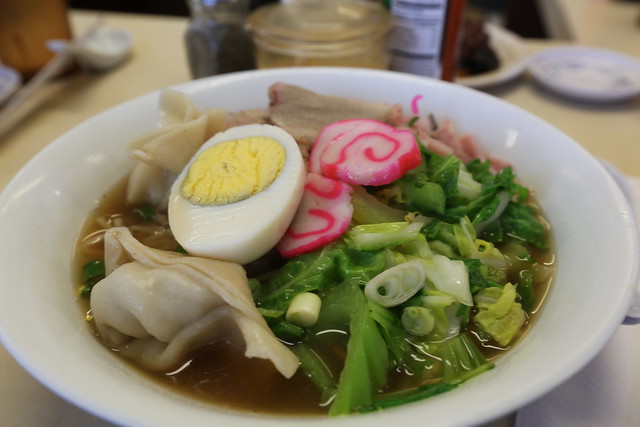 Ah, Kauai. We went over New Year's, to unwind after an exhaustive holiday season. Yoko and I felt we deserved a nice vacation, and we brought along our sig others, my brother Keisuke, and Jay and Rie of Atelier Dion. There's obviously a ton to explore on the island, and we culled a lot of information from friends who visit Kauai frequently (thanks Khoi, Sarah and Allison!). We had such a blast sleeping, snorkeling, eating and sleeping some more, on this special, low-key island.

Well, it's been eight months since we all visited the island and lately I've been wistfully longing to return. The closest I have to my memories is to blog about it, so here's another Umami Mart Map! But truth be told, Kauai is not much of a food destination. We ended up cooking back at the condo (er, Keisuke did most of the cooking) and enjoying our meals on the lanai. But here are a few gems we found during our five-night stay. 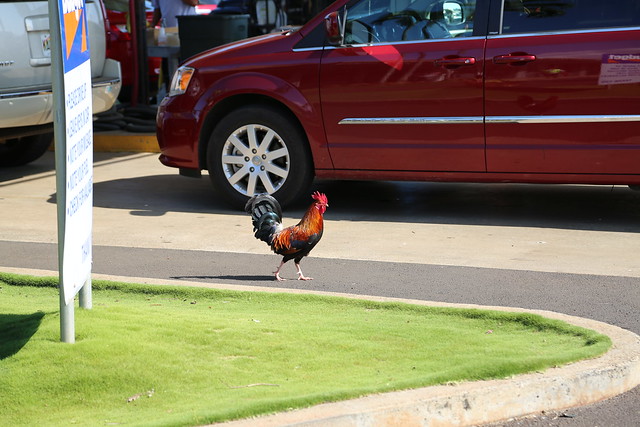 Roaming chickens greet us at the airport! 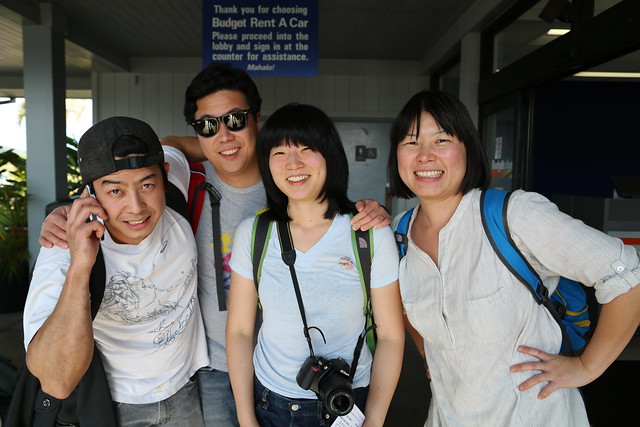 Reunited with Keisuke at the airport, who flew in from LA. We were SO ready for a vacation. 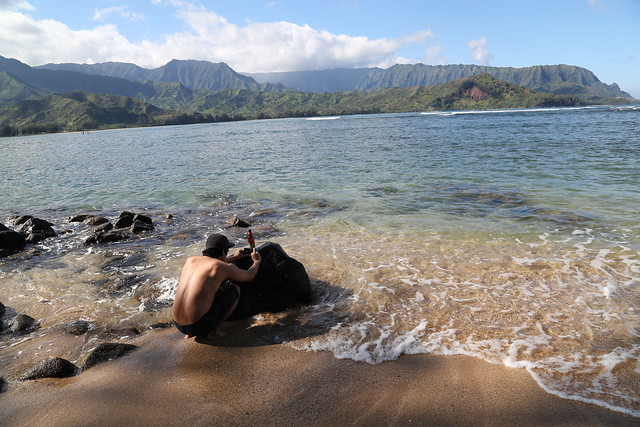 Our beach, in walking distance from our condo in Hanalei Bay.


Kauai is quite easy to get around in a rental car, as it is only one main road, Kuhio Highway, that goes around the island. The entire west side of the island is unpaved for preservation purposes, and so everything is pretty much clustered along the highway between north, east and south. It takes about 30-45 minutes, without traffic, to get from top to bottom of the island.

Common Grounds is a farm and cafe, nestled about mile inland from the Kuhio Highway. It is pricey, but worth the trip. The food is fresh, and the lush gardens are well-kept. We also had a celeb sighting there, Michelle Williams!

Johnny got a burger. 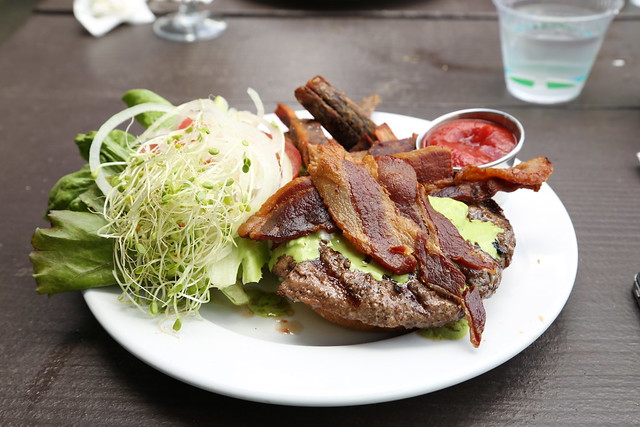 We took a walk on the grounds after our meal. There were swarms of monarch butterflies, it was lovely. 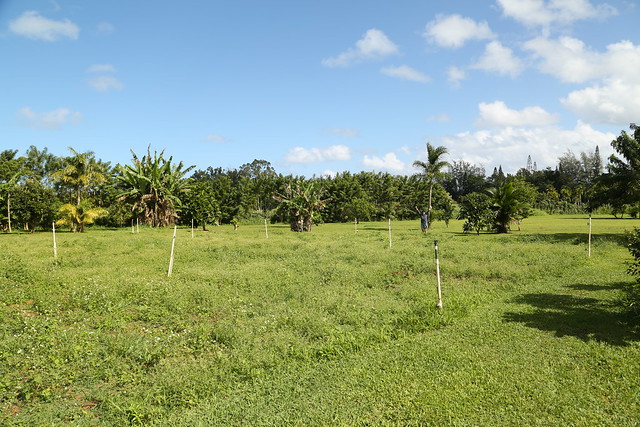 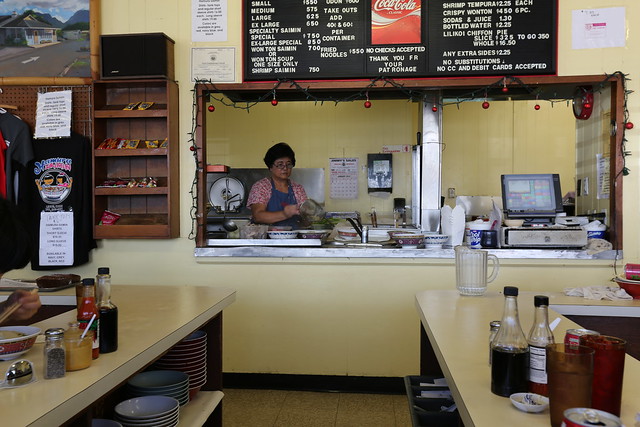 This was our last meal in Kauai, but it should have been our first! Close to the Lihue airport, we made a stop here before our flight back, and we did not regret it. The place was literally a tiny house converted into a diner style restaurant with a peek-a-boo kitchen, a bar, and stools.

Saimin is a Hawaiian specialty, consisting of noodles, wontons, barbecued pork in broth. I had a miserable version on our first night in Kauai, and was ecstatic to find redemption at Hamura's and erase that from my memory. Get the grilled skewered meats and the pie for dessert!

I did not actually eat here, but Keisuke, Rie and Jay did as their flight was later than ours on the way home. We had been to Shrimp Station earlier in the week, which was pretty disappointing, despite the name. Apparently, we should have come here instead for the garlic shrimp. Next time! 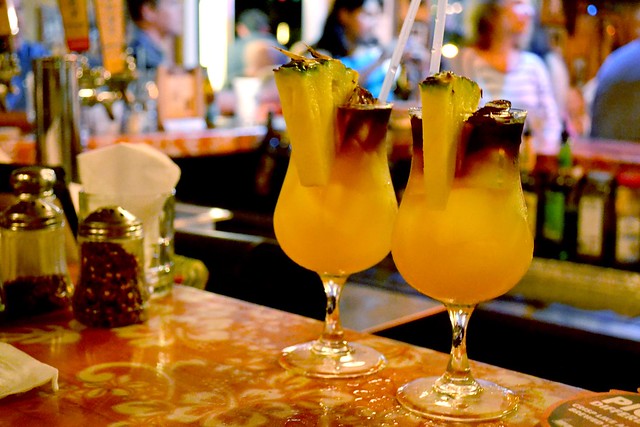 We walked around "downtown" Hanalei Bay for a while until we stumbled upon this place, brimming with locals. Named after the matriarch who opened this bar/restaurant, Tahiti Nui seemed to be the place to be on a Saturday night. Nui brought her secret Mai Tai recipe to Kauai from her native country, and we guzzled a few of these while dancing to the live local band. The food looked quite good too, but we stuck to these fruity cocktails. Be careful, they are dangerous! 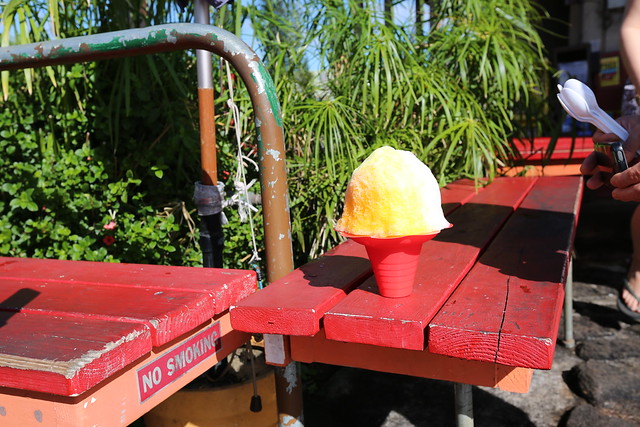 For some reason, we did not have a single shaved ice while we were in Kauai, until we were on our way to the airport (once again) to go home. But Ono Ono made up for our loss with shaved ice the size of our heads in tropical flavors that we could never dream of stateside. And ice cream in the middle! I also wrote about Ono Ono here.

We kept seeing this awesome sign every time we drove down the east side of the island, and we knew we had to make a stop (when it was actually open). True to its word, Banana Joe's sells all sorts of fresh tropical fruits from the island. What a pity that we could not smuggle them home! They also serve freshly-squeezed juices and "frozen milkshakes" made with bananas! 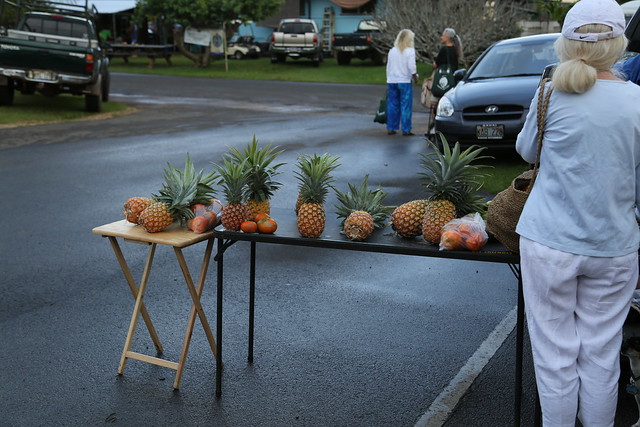 I can't recall which farmer's market we went to, but try to go to one while you are on the island. It's such a special way to see all the local fruit and produce. We also came home with a lot of vegetables for dinner and a bag of fresh rambutans!

FOODLAND
All over the island

We made the mistake of choosing Safeway over Foodland the first night we got to the island cause we had never heard of it. Big mistake. Foodland is awesome! It is the local's choice for grocery shopping, and is way cheaper than Safeway for stocking up (Costco near the airport is also a good option). You can find decent poke in the deli section and they also have an excellent "Asian" section. Make sure to sign up for a Maika'i Card for extra savings.

KALALAU TRAIL
Along the Napali Coast 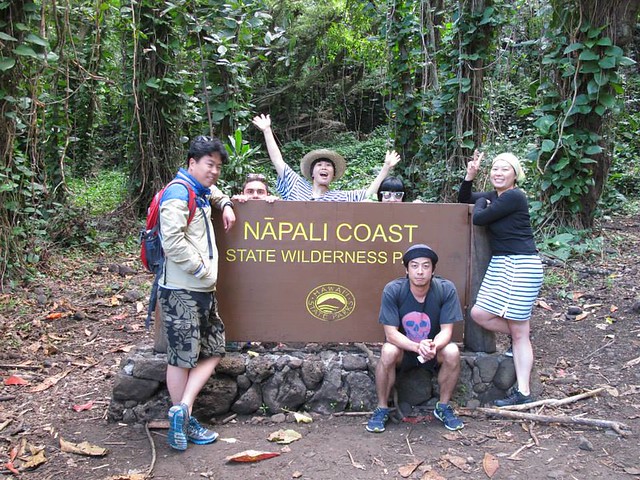 It had been raining off-and-on since we first reached the island, but we decided to be adventurous anyway and try hiking the Napali Coast. It was beautiful, but treacherous -- we couldn't finish the hike because the mud was so slippery and came up to our ankles.

But it was a gorgeous hike indeed, with sweeping views of the land and sea. Jurassic Park was filmed on this island -- it really is quite wild and well-preserved.


Here is a dramatic LOST shot.

The hike was quite challenging at times, but we were bummed that we could not make it to the actual waterfalls. Next time! Make sure to bring food and plenty of water for the hike.

That's it for the 2014 edition of the Kauai Umami Mart Map. We may return next year for this annual tropical vacation, or we may go to a more bustling island like Oahu instead. We do know a thing or two now about Kauai, and feel better equipped for when we return. Like going to Hamura right when we land and stopping off at Foodland or Costco for groceries. Costco also has the cheapest gas on the island!