Did you know that a bee's lifespan is based on the distance it has flown? One bee lives to fly about a total of 500 miles.

This is just one of the many things we learned from Betsy and Miguel of East Bay Urban Bees during our hive tour. The tour could not have happened on a more beautiful, warm October day. The combination of clear sunlight and a focused group of busy bees were a feast for the eyes, ears and nose. Seeing the bees freely flying around was a thrilling experience. The surround sound of an intense buzz was better than any Dolby soundtrack and the smell of the smoker added to the excitement.

In addition to learning everything about drones, workers and the Queen, all of our questions about honey production, pollen collecting and propolis application were answered.

We started with an intimate talk with the East Bay Urban Beekeepers, Betsy and Miguel, to talk about hive construction and different types of bees.

Everyone had a lot of questions

Miguel with a Langstroth frame

And then, we were off to the hives.

Safety first! Betsy and Miguel helped everyone suit up in the proper gear before meeting the swarm.

I was very excited.

Gathering round the hive:

Betsy fills the smoker with dried out olive leaves from their garden. It dulls the senses of the guard bees so they don't attack.

Tape recording all the buzzz

The bees up close and personal

After surviving the hive tour sting-free, we were rewarded with a honey tasting. 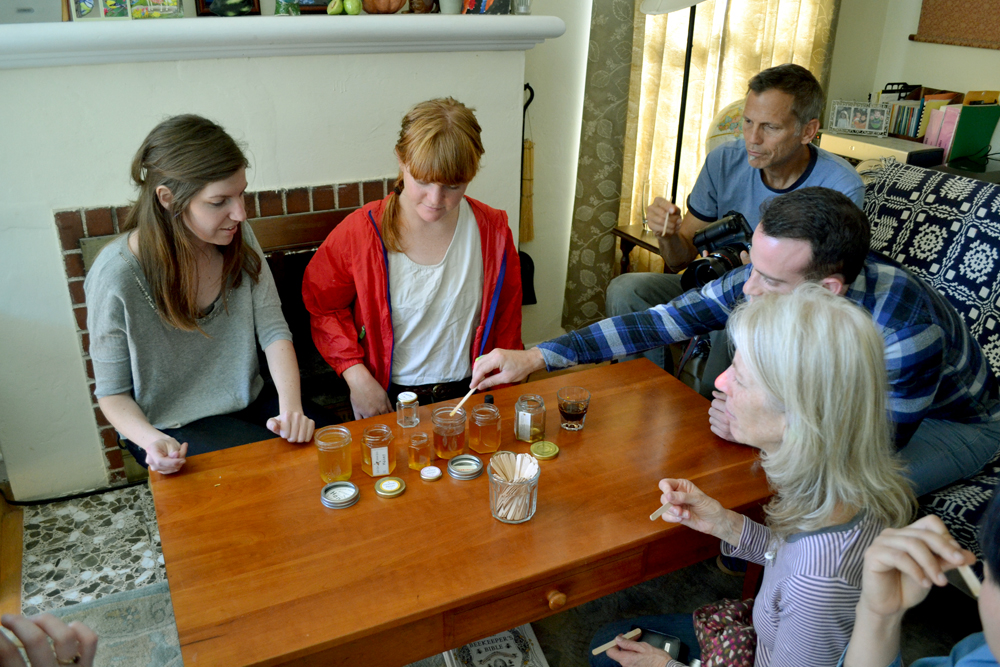 What a sweet ending.

We'd like to thank Betsy and Miguel for inviting us to their hive and giving us the grand tour. And thanks to everyone who came out for this sunny Umamiventure!