I don't know why I do this. The harder the recipe is, the more excited I get. I don't know how I decided to make macaroons, but somehow I did..

When everyone goes to Paris (I've never been there, yet), they go queue up at either Laduree or Pierre Herme (did you know Pierre used to work at Laduree?) and buy macarons for 3 Euro a piece. Why? To me, macaroons are meringue and coconut, chewy, kind of gross sweets.

But French macarons are different. They are almost cookie like, yet a LOT softer and lighter than a cookie. I googled around a bunch of recipes, and found some. Since I am a pseudo-baker who does not measure exactly, I don't like recipes with gram measurements since I have to go find my kitchen scale in the storage. So I tend to use recipes with cups and spoons. Also I don't prepare all the necessary ingredients prior to the start baking, so my baking process is a complete mess.

Macaron recipe is very simple, which means VERY difficult to perfect... It's basically a day old egg whites (this thickens egg white, apparently, and makes better meringue), powdered sugar and almond flour, plus food coloring, if you want. I will go into cream and jam making once I perfect macaroon part.

Trial #1 (Saturday)
I used an American recipe. 5 egg whites, 10 oz each of powder sugar and almond flour, plus 1/3 cup of regular sugar for making meringue. Make a very thick meringue, add dry ingredients, mix them. How simple, but this mixing part is the MOST important process. If you mix too little, it will be ruined, if you mix too much, it will be ruined. I didn't know when to stop, so I mixed everything together, trying not to lose the air in the meringue. When it was barely mixed together, I put everything in the bag. I didn't have 1 cm round tip, so I used star tip instead, which is why the surface looks odd... 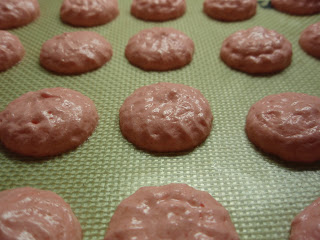 I baked them in 300 F for 15 minutes or so. Surface didn't get smooth like the ones at Laduree, it didn't have the "leg", which is the little air hole on the bottom, which is the most important thing to look for if you succeeded in making macaroons or not... So I failed... This looks like a weird colored cookie, sandwiched with raspberry jam... It tasted good, since I used a very nice raspberry jam from Italy. Definitely Laduree wins... Yamahomo needs a LOT more trials. 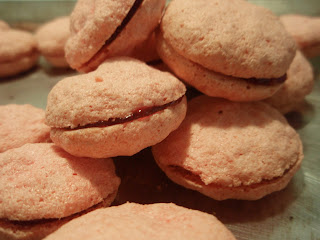 Trial #2 (Sunday)
I couldn't sleep well Saturday night, because of my failure the day before. Laduree was laughing at me, saying "Yeah, work it bitch, you can never win." I needed to do something. I did not expect to perfect it the second time, but I was determined to get better at it. I wish I had this kind of motivation on other aspects of my life, such as work, working out, or controlling my drinking, etc.
This time, I took out my kitchen scale, and googled around recipes in Japanese. You might be surprised, but the Japanese make such delicate and almost-better-than French sweets. FYI, team Japan won World Pastry Championship a couple of years ago. We don't just mush beans or rice to make sweets.
Ingredients were the same, but measurements were a lot more exact. 50 grams of egg whites, 50 grams of almond flour, 100 grams of powdered sugar. Process was basically the same, but there was a HUGE difference. When mixing dry ingredients to meringue, this recipe said to break air from meringue, and mix VERY well until the batter falls off the spatula. Then what is the point of making a VERY stiff meringue? I am not a physicist so I just followed what the recipe said, and mixed until batter fell off the spatula. Very runny. This time, instead of using a star tip, I just dumped everything in zip-loc bag, and cut the tip and piped it out.
To my surprise, so far this one looks great. Almost perfect round, shiny, just the way I was hoping for. 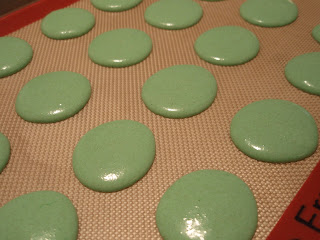 After you pipe the batter out, you MUST leave it for 30-60 minutes and let the surface dry up. this makes smooth macaron. 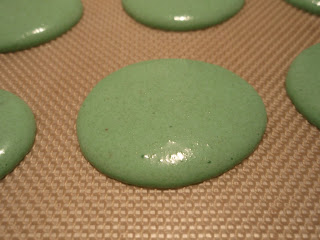 This time, I was very excited, maybe I can beat Laduree on the second trial?! Go Yamahomo! I baked this on 360 F, and in about 3 minutes or so, "LEGS" showed up!!! This happens because the surface cooks in the first couple of minutes, and air from the egg whites try to escape, hence these air holes are created. This makes the french macarons the way it is. It looks almost like a hamburger bun. I was ecstatic! However, I noticed that the edges were getting too brown. I touched the surface and it was tough, so I took it out of the oven. Still very excited.

I went to bathroom, and came back, when i saw a sad deflated macarons on the cooking rack... WTF!!! There was a little bit of "leg" still remaining, and so I was ok about it. 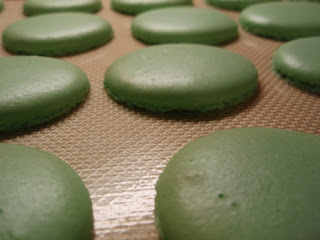 Then a disastrous ending came along. I took them out of the oven too early, and inside wasn't cooked through.. Everything was stuck on the bottom, and when I tried to pull it off, it broke into pieces...

Laduree, I must admit, you beat me, again... But I am getting better, and next time, I will perfect it and will open Yamahomo's Macaron Shop. 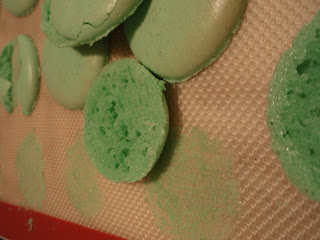