I learned my lesson. Mix the batter well till it falls off the spatula, and don't take it out of the oven too soon. Other than the fact that I am super inpatient, all the necessary ingredients and mind set was there. I couldn't let go of the defeat of my Sunday failure, so I tried it again last night.

Trial #3 (Monday)
I followed the way I made the green batch. The difference was that I didn't process almond flour. Almond flour usually has particles of almond, and for the macaron recipe, it calls for grinding it even finer. I thought, maybe leaving bits of almond will make the texture interesting. Also i was too lazy to go through the processing... So I just mixed till very smooth.

I piped them onto the baking sheet. So far so good. A bit too runny and flattened too much... 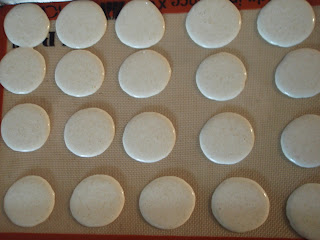 Surface is shiny as it should be. 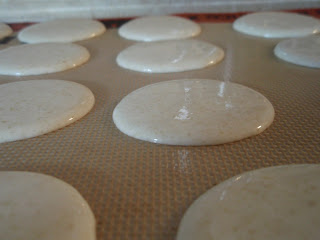 YES, there are legs, and I waited for 10 minutes this time, and made sure it's cooked through. 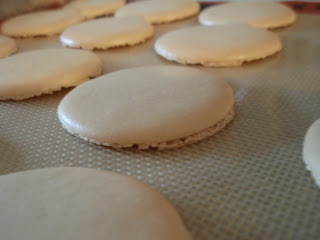 With the excitement, I even kicked up the cream by mixing raspberry jam with whipped cream. Very spontaneous, Yamahomo-esque. 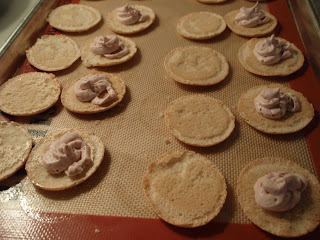 Laduree, I made it to this level with three trials. It looks just like the ones you sell at your snobby store. 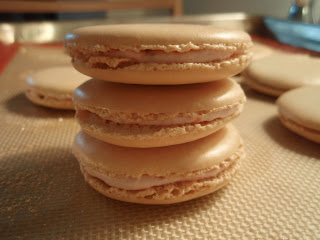 Verdict: Laduree still wins. It looks a lot like real thing, but it's a bit too thin. I probably mixed the batter too much, hence it became too flat when piped out. I should have turned my spatula twice less than I did. But this is the difference between professional and amature. The cookie-like, yet the too-airy-to-be-a-cookie texture is hard to achieve. For now, I feel I got to the stage where I am satisfied enough. However, my battle to make a perfect macaron continues...

*Editor's note: I just realized that there is a difference in spelling between the French macarons, and macaroons. That extra "o" makes a HUGE differnce. Although the "macaroon" derives from the "macaron", these delectible French delights should NOT be confused with the coconut-packed variety, popularly sold in the US.